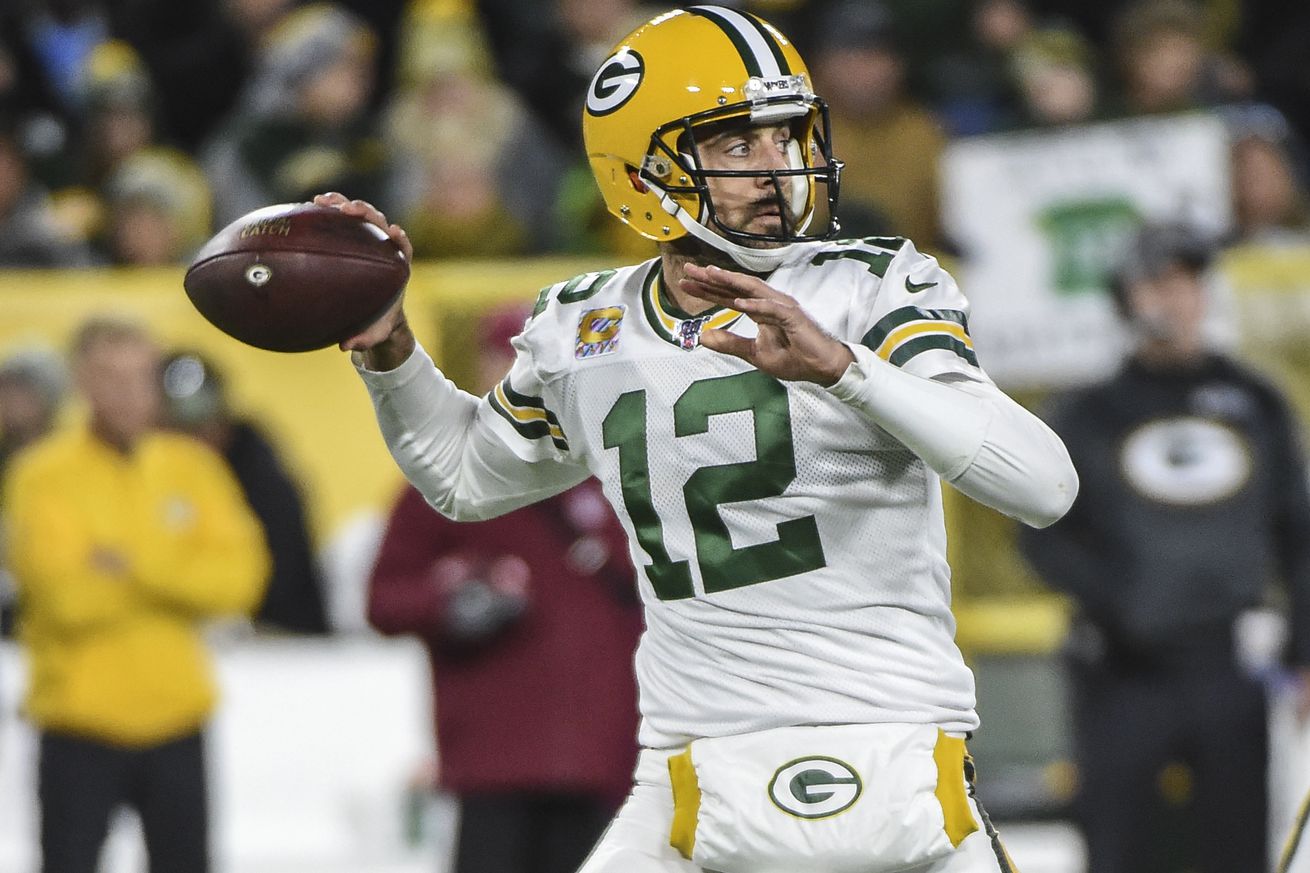 EPA is telling you the truth about what happened, but lying about why.

I like Ben Baldwin, and I have learned a lot from reading his work. I even find his constant Aaron Rodgers trolling to be charming. That said, he does occasionally let that trolling (which has more basis in fact than many Packer fans like to admit) get the better of him, and his recent post in the Athletic is a perfect example.

Let’s first acknowledge that Rodgers has experienced decline. He is in his mid-30s, and almost all athletes do so. While you do run into the occasional Tom Brady, they are the exception, not the rule, and most players get worse as they age. Rodgers’ production has dropped off whether you rely on advanced stats like EPA (as Baldwin does) or the conventional basics like completion percentage and yards per attempt. The only area he has generally improved on is interception percentage, and his extreme conservatism with the ball is certainly one of the factors impacting his production.

That said, Baldwin’s attempts at explanation involve a lot of hand-waving where the narrative would be inconvenient for him. Baldwin frames this as entirely a Rodgers issue, and that’s obviously not true. There is very rarely a single cause for anything, especially on a football field, but he glosses over what I would consider obvious issues, and that’s just bad form. Let’s start with Rodgers supporting cast, and the receivers in particular. Baldwin writes:

“Surrounding talent: We’ve covered the Packers’ recent run-game dominance, so we already know the Packers aren’t a one-man show on offense. In addition, ESPN’s measure of pass protection based on player tracking data found the Packers to have the second-best pass-protecting line in 2018, and it again has Green Bay at No. 2. Although the Packers’ wide receivers have been hit with the injury bug, we’re trying to explain a drop that has been going on for five seasons. A lot of quarterbacks would love to have Rodgers’ pass protection and a No. 1 wide receiver like Davante Adams, who had only missed three games in the three seasons before experiencing turf toe in September.”

In Rodgers’ outstanding 2014 season, a 29-year-old Jordy Nelson led the way with 1519 yards on 151 targets. Randall Cobb,then just 24, was also spectacular 1287 yards on 127 targets. This was Davante Adams’ rookie season, and while he was third on the team with 66 targets, it’s worth remembering that Adams had a slow start to his career as he had issues with drops, and was mostly used for bubble screens and other “get him the ball in space” nonsense. Adams caught just 57% of targets (most of which were short) Randall Cobb was 2nd overall in DVOA that season, and Nelson was 8th, while ranking 2nd in DYAR. They were fantastic.

Fast forward to 2015, and Nelson, who had 151 targets the previous year as the 8th most efficient receiver in football is gone with a torn ACL. They replaced those targets by upping targets to Adams, who was still struggling at this point, and caught only 53% of passes thrown his way in 2015. They also brought in the freely available James Jones, who did a nice job averaging almost 18 yards per reception, but only hauled in 50% of his targets. Anyone who actually watched this season knows the story. Rodgers did most of his damage when drawing people offsides or with too many men on the field. He sat in the pocket forever and his receivers, including Cobb, had issues getting open consistently.

In 2016, Rodgers had a good season with 40 TDs against 7 picks. It’s a weird season, as quarterbacks with such a low Y/A don’t typically throw 40 TDs, but it was undeniably a good one. Green Bay scored the 3rd most points in the NFC and the 4th most in football. If you wish to argue that they did so inefficiently, good luck with that.

The biggest reason the offense was good again is that Davante Adams actually turned into Davante Adams (997 yards, 121 targets, 12 TDs), and Jordy Nelson managed to cobble together one more outstanding performance before his substantial decline set in with 1257 yards on 152 targets and 14 TDs. Nelson was 8th in DVOA, Adams 21st.

So far the story is “Rodgers lost his best receiver and got worse, then he got him back and rebounded.” This is all fine and normal. In 2017, Rodgers would suffer one of his major injuries as the Vikings Anthony Barr would snap his collarbone in week 6. To that point, Rodgers had been again, quite good if a bit conservative, completing 66.3% of his passes for 1385 yards, 13 TDs, and 3 picks. The team was 4-1 entering the Viking game, which they lost for obvious reasons.

His 2017 stats don’t look quite as good as they should because Rodgers came back too early in an attempt to push them into the playoffs, and threw 3 picks with a dead arm against Carolina. So to recap:

2018 was undeniably a down year, and also the year that would get Mike McCarthy fired, but it’s worth noting that while Adams again so a huge target share with 169, the 2nd leading receiver on the team was Jimmy Graham, followed by MVS. This is all a far cry from having Adams and Nelson at the top of the chart, and it’s light years away from Rodgers’ glory days of Jennings/Nelson/Driver/Finley/Jones. Personnel plays an enormous role in quarterback efficiency, and anyone who wants to argue that the slow degradation from Jennings/Nelson/Jones/Finley to Adams/Allison/MVS/ZombieJimmyGraham doesn’t matter, needs to get their head out of R for a bit.

I also have a fairly large problem with this.

“The collarbone injury in 2017 or the knee injury in 2018: Those reasons don’t make any sense because the decline started in 2015, well before the injuries. Next.”

While it’s true that the injuries Rodgers suffered in 2017 and 2018 do not explain 2015, they very much explain 2017 and 2018. There can, in fact, be different competing and complementary explanations for things, and that’s exactly what we have here. In particular, Rodgers’ final game of 2017 in a desperate attempt to make the playoffs really hurts his season numbers. In 2018 he was injured and his receivers were objectively terrible outside of Adams. Occam’s Razor is still pretty useful.

One final issue I need to address can be found here:

“But by 2018, many of those concerns had been alleviated, or at least mitigated, according to Andy Benoit of Sports Illustrated. “(McCarthy) has used spread formations this November about half as often as he did in September. More importantly, he’s used condensed formations, with receivers aligned tight to the formation, about three times as often. Those condensed sets are the same thing McVay uses in L.A. … This makes it easier for a QB to anticipate open throws.” No one is going to call McCarthy a top-flight play-caller, but the problems with the Packers’ offense, especially in 2018, extended well beyond him. And as we’ve seen, there hasn’t been a return to the peak Packers offense now that McCarthy is gone.”

This paragraph comes from a section exonerating McCarthy’s play-calling from responsibility. I actually (partially) agree that McCarthy did improve quite a bit in 2018, as he likely sensed the heat, however, as Ben pointed out earlier regarding 2018:

“Those reasons don’t make any sense because the decline started in 2015, well before the injuries. Next.”

For those of us who have watched quite a bit of McCarthy, I think it’s fair to say that his focus on execution over strategy worked well with the amazing receivers the team employed until 2014. Each one of them was more than capable of winning one-on-one matchups, especially with Nelson against a #2 corner or James Jones on a #3. McCarthy’s problems were exacerbated by the decline in talent at the position, where a young Davante Adams is being asked to take on a lot more, with only late-round picks like MVS and EQ, or washed up players like Jimmy Graham behind him. Those receivers are decidedly not capable of winning one-on-one matchups. Also, let us perhaps not cite to Andy Benoit as an expert on tape analysis.

McCarthy’s lack of innovation in the face of declining talent was a huge factor in Rodgers’ decline and of course, in McCarthy’s firing.

Baldwin takes additional liberties as well, citing some tape of Rodgers struggling against Chicago’s all-world defense. The piece isn’t entirely bad, and I’d recommend you read it. As I said previously, I agree Rodgers has declined aside from all of these other factors, and part of that decline is a tendency to get injured more frequently. Both Ben and I used Occam’s Razor here. Occam’s Razor isn’t just a pithy saying, it’s really a commentary on probability. It’s usually read as pitting several competing explanations against each other to find the “right” one, but in most cases, the simplest explanation isn’t a single explanation. There are many reasons for the decline of Rodgers, and the passing game generally, and most of them dovetail together, with a decline in receiver talent feeding a decline in McCarthy’s system. That lack of talent also led to Rodgers holding the ball, and taking more sacks, which led to him getting injured, which led to additional physical decline. If the team upgraded the wide receivers and tight ends there is no reason Rodgers could not be a top-5 quarterback again.

The simplest explanation, if you actually look for it, is all of them. Except for the running game thing. I’m right there with Ben on that. The Packer running game is almost always good.