A standout performance against a first-round pick helped lure the Green Bay Packers to offensive lineman Zach Tom, the team’s second of two fourth-round picks in the 2022 draft.

“One of the big things that when we watched Zach, was that game versus Florida State, and blocking the defensive end they had who was highly rated. He did a great job,” Butkus said last month. “How did he do it? He’s competitive. He’s smart. And he’s athletic, he can move, he can bend. All three of those things, we look for in our offensive linemen. That’s how he did it.”

Tom played 51 pass-blocking snaps against Florida State and didn’t allow a single pressure, per Pro Football Focus. Shut down by Tom in the first half, Johnson eventually switched sides and rushed against the right tackle for much of the second half.

The New York Jets made Johnson the 26th overall pick in the 2022 draft. The Packers got Tom at No. 140 overall in the fourth round.

Despite the draft status disparity, Tom scored a decisive win over the ACC’s Defensive Player of the Year during Wake Forest’s win.

The performance played a partial role in why the Packers believe Tom can play any position along the offensive line, including tackle. On the team’s website, Tom is simply listed as an “OL” and doesn’t have a true position designation.

Tom said his goal is to be a five-position player in Green Bay.

The pass-blocking talent is a big reason why he could succeed. Pro Football Focus rated Tom as the top pass-blocker in college football last season. While undersized, Tom has everything else required of being an offensive tackle at the NFL level , including body control and athleticism. And he proved he can handle NFL-level competition when he out-played Johnson last season.

Justis Mosqueda of Acme Packing Co. made a cut-up of every pass-blocking snap featuring Tom vs. Johnson, which can be viewed below:

The Packers took Wake Forest left tackle Zach Tom in the fourth round. Here’s every dropback pass rep he had against Florida State’s Jermaine Johnson, who was drafted in the first round by the Jets. pic.twitter.com/EkO9j3Lr6l

Here’s another one of Tom’s best pass-blocking snaps vs. Johnson, via Ben Fennell: 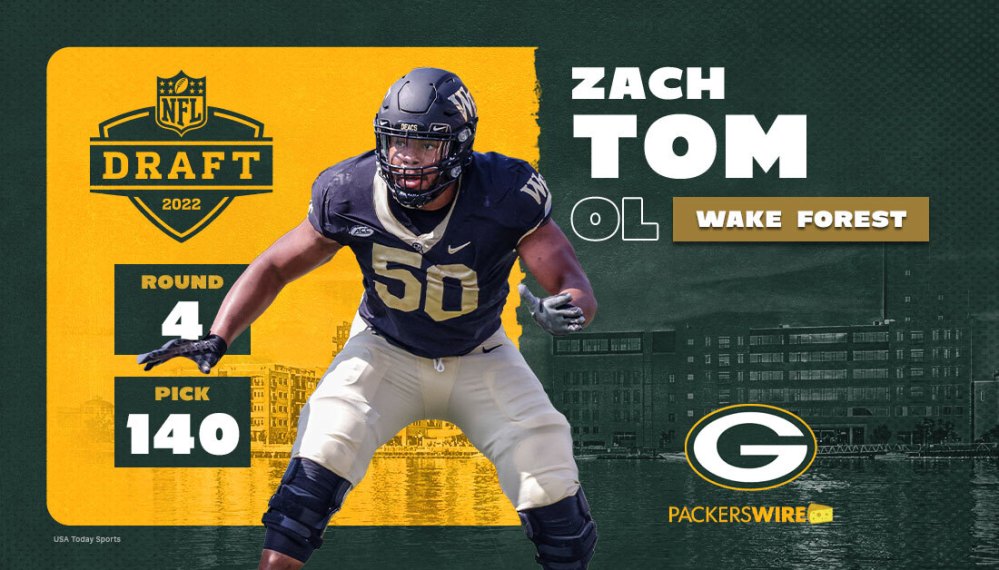