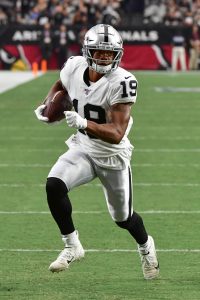 It’s been a busy few days for Grant and Jones, as the two wideouts worked out for the Vikings on Friday. The 28-year-old Grant caught four passes for just 14 yards with Oakland this season, although he did snag 35 passes for 334 yards with the Colts in 2018. Jones has 67 career receptions in 45 games, and he also has some experience returning kicks and punts. He had three receptions for 38 yards and one score in three games with the Giants this season.

Vanderdoes, a 2017 third-round pick by the Raiders, had a solid rookie season, compiling 18 tackles in 16 games (13 starts). He tore his ACL at the end of that season, and he wasn’t activated from the PUP during the 2018 campaign. Vanderdoes landed on IR following this year’s preseason, and he was cut by the organization earlier this week.

Thomas, 24, appeared in five games as a rookie for the Vikings last season, compiling 51 total yards on offense. Jackson was an undrafted free agent out of Buffalo in this past year’s draft. He spent the preseason with the Bills.