Imagine the scenario: Aaron Rodgers just wrapped up his postgame press conference at U.S. Bank Stadium after the Green Bay Packers defeated the Minnesota Vikings 27-23. The reigning NFL MVP applauded the performance of free agent addition Sammy Watkins. The former first-round pick and king of week one performances finished the game with six receptions for 125 yards and a touchdown. The following week Allen Lazard will lead the team in receptions and yards. The week after that Christian Watson will showcase his talents with his first 100-yard receiving game. A week later it will be Aaron Jones leading the team in receptions.

The point of this lede is to show how unpredictable Green Bay’s passing game will be this season. Predicting who will lead the team in receptions week-to-week will be a fool’s errand.

That type of unpredictability is a big reason why Christian Watson checks in at No. 4 in our Rookie Impact series. Watson will no doubt make an impact, but there could be weeks where he throws up a zero in the catch column.

The Packers traded up in the second round to select the North Dakota State University wide receiver with the 34th overall pick. Watson will start training camp on the PUP, but by all reports, it’s not a long-term issue.

Source: the PUP issue with #Packers WR Christian Watson is not considered to be serious/long term and he is expected to be available sooner than later.

If the season were to start today, Watson would likely be fourth on the wide receiver depth chart, behind Lazard, Watkins, and Randall Cobb.

While Watson may be wet behind the ears, none of the wide receivers currently on Green Bay’s roster have the rare combination of size (6-4) and speed (4.36) that Watson possesses.

“The first two things that come to mind with Christian Watson are, big and fast,” Milt Hendrickson, the director of football operations for the Packers said. “His size, speed, and ability to be a playmaker continued to stand out.”

The Packers need explosive playmakers and Watson is a threat to make a house call to the end zone every time he touches the ball.

“He’s the type of wide receiver that you have to account for on every play,” Hendrickson said. “He is so fast and he’s an imposing guy out there. He can stretch the field…I think he’s a really good fit for our offense.”

Expect Matt LaFleur to dial up manufactured touches via jet sweeps and bubble screens to get the ball in his hands. The Packers can utilize him out of the backfield, in the slot, and on the boundary.

On top of that, Watson has the size and speed to challenge cornerbacks vertically. He chews up grass with his long strides and is able to get on top of cornerbacks.

While his impact on the offense may vary week to week, there is no doubt that Watson could provide an immediate impact on special teams as a kick returner. Watson finished his career at NDSU with two kickoff return touchdowns and averaged 26.4 yards per return. He was an All-American as a kick returner in 2020 after he returned two kicks for touchdowns and averaged 33.8 yards per return. 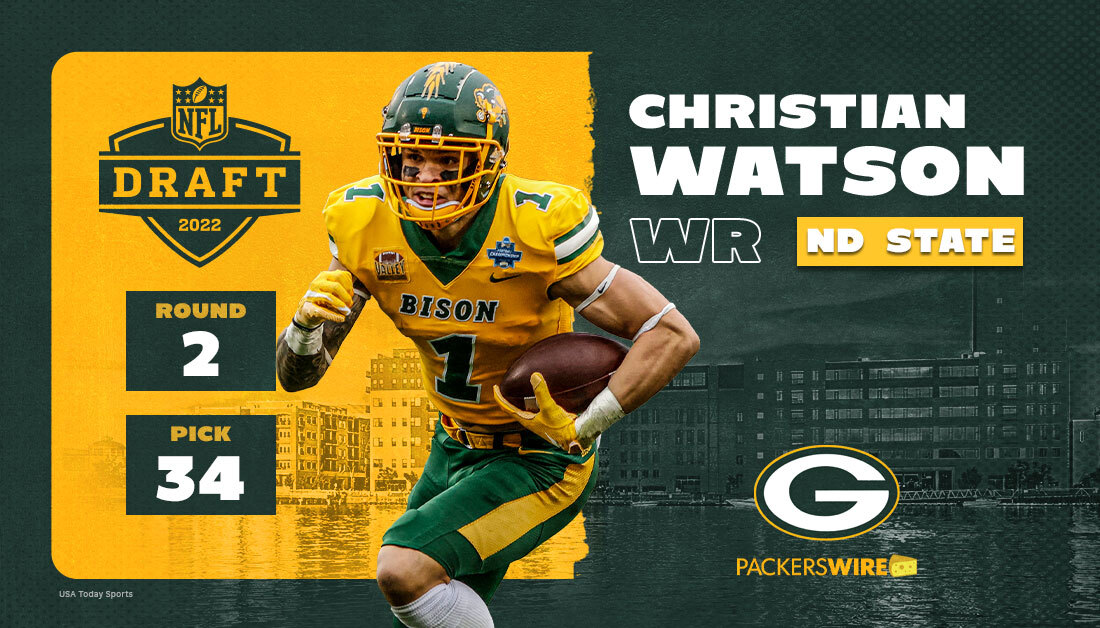 Prediction: The Packers have started to remodel their wide receiver room and Watson is the centerpiece. The former NDSU wide receiver is a big part of Green Bay’s future plans. How much of an impact he’ll provide during his rookie season will likely be sporadic.

Watson has the talent to be a betting favorite to win Offensive Rookie of the Year. When you have the back-to-back MVP throwing you the ball anything is possible.

The Packers need to replace 149 receptions, 1,983 receiving yards, and 14 touchdowns. Watson could potentially take a big bite out of that apple.

What’s far more likely, is that Watson will finish his rookie season with 41 receptions for 615 yards and five touchdowns, while giving Green Bay’s kick return game a much-needed shot in the arm.

Packers rookie impact: Can a pair of 7th round picks crack the roster?