Julio Jones‘ Buccaneers agreement — a one-year, $6MM deal — became official Wednesday morning. The future Hall of Fame wide receiver joined a team that already carried one of the NFL’s best receiving groups, but he was linked to teams with question marks at the position. 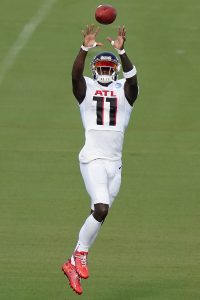 The Packers were another team to pursue Jones, according to ESPN.com’s Adam Schefter (on Twitter). While other teams are believed to be involved here, Tampa Bay and Green Bay represent Jones’ known suitors. The Colts were not involved, with GM Chris Ballard indicating the team was not planning to add the former Falcons and Titans target (Twitter link via the Indianapolis Star’s Joel Erickson).

Green Bay represented one of Odell Beckham Jr.‘s most prominent pursuers last year, and the Jones situation unfolded similarly. After Beckham joined the Rams, Jones is set up to help another Packers NFC rival. The Pack offered Beckham the veteran minimum; the Rams came in with a better proposal to snare the talented wideout last November. It appears likely the Packers’ Jones offer came in south of the Bucs’, sending the All-Decade pass catcher to a team flush with receiver options.

The Packers are attempting to regroup at wideout, having lost their top two options from recent years — Davante Adams and Marquez Valdes-Scantling. They did add Sammy Watkins in free agency and North Dakota State’s Christian Watson in Round 2, before also drafting Nevada’s Romeo Doubs in Round 4. But the team’s receiving corps is light on dependable players and noticeably lacks a No. 1-type option — barring Watson breaking out quickly. Green Bay has been linked to OBJ again this offseason, but Los Angeles has shown far more consistent interest.

Allen Lazard and Randall Cobb represent the Packers’ top holdover options, with the former having an opportunity to make a major climb in Aaron Rodgers‘ aerial hierarchy ahead of a potential 2023 free agency bid. Beyond Beckham, veterans like Emmanuel Sanders, T.Y. Hilton, Cole Beasley and Will Fuller remain unsigned. But Jones moves a key piece off the board.

Linked consistently to the Colts this offseason, Hilton remains on the team’s radar. Ballard confirmed the team has not ruled out a reunion with the third-leading receiver in team history (Twitter link via Erickson). The Colts lost Zach Pascal to the Eagles in free agency and are counting on second-round rookie Alec Pierce to be a key auxiliary piece in their Michael Pittman Jr.-fronted receiving cadre. Beyond Pittman, the Colts are thin on known commodities at the receiver position. Parris Campbell remains in the team’s plans, but injuries have defined his career through three years. Second-year player Mike Strachan underwent knee surgery this summer, per The Athletic’s Zak Keefer, who adds (via Twitter) the 2021 seventh-round pick may be sidelined until the final days of training camp.