Tulsa linebacker Zaven Collins is arguably the best inside linebacker prospect in this year’s draft. Collins is close to a sure-fire first-round pick, but if he does slide, the Green Bay Packers could get a steal if they were to select Collins. He’s the type of player Green Bay has lacked at inside linebacker for quite some time and would instantly elevate the middle of the defense.

You’re probably wondering if Collins is even worth a look. The Packers haven’t valued his position, and they have two young players in Krys Barnes and Kamal Martin, who are anticipating a larger role in next year’s defense.

Barnes and Martin aren’t necessarily the de facto starters in Joe Barry’s defense. Barry has definitely familiarized himself with both, but he could be lobbying to spend a significant draft pick to bolster the position.

Also, when last season ended, general manager Brian Gutekunst was asked about the performances of their inside linebackers, and he didn’t exactly hand out a glowing review.

“I think we have to have more productive play out of there,” said Gutekunst. “Obviously, we had some injuries there early in the year, and I was really proud of the way some of the guys stepped in and competed, but I do think we need to have better production out of our inside linebacker group. We have some young players in there that will grow and get better, and I think we’ll see that moving forward.”

Last offseason, the Packers tried to address inside linebacker when they signed Christian Kirksey to replace Blake Martinez. Unfortunately, he didn’t pan out quite like they had hoped as he battled injuries and inconsistencies as the Mike linebacker.

Luckily, Green Bay drafted Martin in the fifth-round, and Barnes stuck around after coming on as an undrafted free agent. Both missed time during their first seasons, and while they showed promise, they could be question marks as the expected starters in 2021.

That is where Collins comes in. Judging by the comments made by Gutekunst, the Packers may look to augment the position with talent very soon. Collins has met virtually with teams during the pre-draft process, and Green Bay happened to be one of them.

If the Packers are serious about finding help at inside linebacker, Collins is an intriguing prospect. He’s got great size, length, and athleticism.

To get a better understanding of Collins as a player, let’s take a closer look at what Collins might bring to Green Bay’s defense:

Need speed in the middle of your defense? Zaven Collins has plenty. pic.twitter.com/xJW1c417Xb

If you want a rangy linebacker, Collins is your guy.  He has true sideline to sideline speed and is very good at tracking down ball carriers. Collins doesn’t make the tackle on this play, but he showcases good play speed that will translate well to the next level.

Collins needs to get quicker at diagnosing, but it isn’t his worse trait. When he doesn’t have to take on blocks, he is very quick to react and make a play on the ball. This play was over instantaneously because Collins didn’t waste time getting upfield and put himself in great position.

Again, keep Collins clean, and good things will happen. He is fast enough to beat offensive lineman to the point of attack and make big plays. This just so happened to result in a safety.

Big players show up in big moments. Hell of a play here by Zaven Collins. pic.twitter.com/iG3N6QpPBJ

Collins can stay on the field for all three downs. His athleticism in coverage jumps off the charts, as evidenced by this crucial fourth down against SMU. Collins is reading the mesh over the middle and moves to stay on top of the receiver, however, his eyes remain on the quarterback. When he sees the quarterback step up and look to run, Collins takes a good angle and uses his burst to make a play short of the first down.

Zaven Collins has a solid level of comfortability in coverage. Has a good feel for spacing and routes that are developing even when his back is turned. pic.twitter.com/PUNZQv2u5N

Collins is fun to watch drop in coverage. His movements are fluid, and he has good mental processing to understand route concepts (he actually played quarterback in high school). It also doesn’t hurt that he can use his length to disrupt passing windows. On this play, he’s reading the quarterback the whole way and is in decent position to make a play on the ball. He barely misses the pass deflection but stays with the play and comes up with an interception on a tipped ball.

Easily could have been a pick for Collins pic.twitter.com/RViU5djrZA

In total, Collins had four interceptions in 2020. He has very good ball skills for a linebacker and could have had even more. Here, he reads the slant perfectly and has a good chance at another pick.

Good awareness in coverage by Collins to take away the spot route. pic.twitter.com/gYhG9LXhNN

One more play to demonstrate Collins’ effectiveness in coverage. His eyes are shifting between the receiver and the quarterback while he continues to sink into a good position in coverage. Overall, a nice rep that shows Collins isn’t guilty of tunnel vision and solely reading the quarterback as some linebackers might do.

One area I’d like to see Collins improve on is his technique with taking on blocks when linemen are able to climb on him. pic.twitter.com/k9ITJ8Wslj

We’ve seen Collins make good plays against the run, but when he has to take on blocks, he has a tendency to put out some bad tape.

A look at Zaven Collins engaged with a TE. Not great. pic.twitter.com/oILGnsvg4n

Against a tight end, this should have been a smooth rep. Instead, Collins ends up on the ground.

The battering ram technique is effective when you know someone can fill your gap. That’s wasn’t the case for Collins here. pic.twitter.com/7uGZimetse

Collins has enough functional play strength and length to stack and shed blocks. However, he sometimes forgets to use his hands and relies primarily on his athleticism to make plays. If he can continue to work on his block-shedding technique, he could be a great NFL linebacker. Otherwise, he will probably get washed out by a good run-blocking scheme.

I wanted to end this on a high note, so let’s take a look at another one of Collins’ versatile traits. When asked to rush the passer, he can be highly disruptive.

Zaven Collins is the best ILB in the 2021 draft class pic.twitter.com/rtokVkBIZg

If I didn’t know any better, I’d say Collins was an edge rusher based on this rep alone. He looks extremely comfortable out on the edge and beats the left tackle with a speed rush and cross chop. You may remember the Packers trying to do this with Oren Burks, but it failed miserably. Collins, on the other hand, can win from a variety of alignments.

Watching Zaven Collins rush the passer is a thing of beauty pic.twitter.com/Y8hKH6TxCj

Collins can also rush up the middle if needed.

If Green Bay is looking for a difference-maker at inside linebacker during the draft, Collins fits the bill. He’s got a great blend of size and athleticism that can be a rare find at his position. He’s a polished tackler and is versatile enough to be implemented in different ways while remaining impactful. Naturally, there are some things he needs to clean up to reach his true potential, but Collins is capable of being an immediate starter on just about any NFL defense. 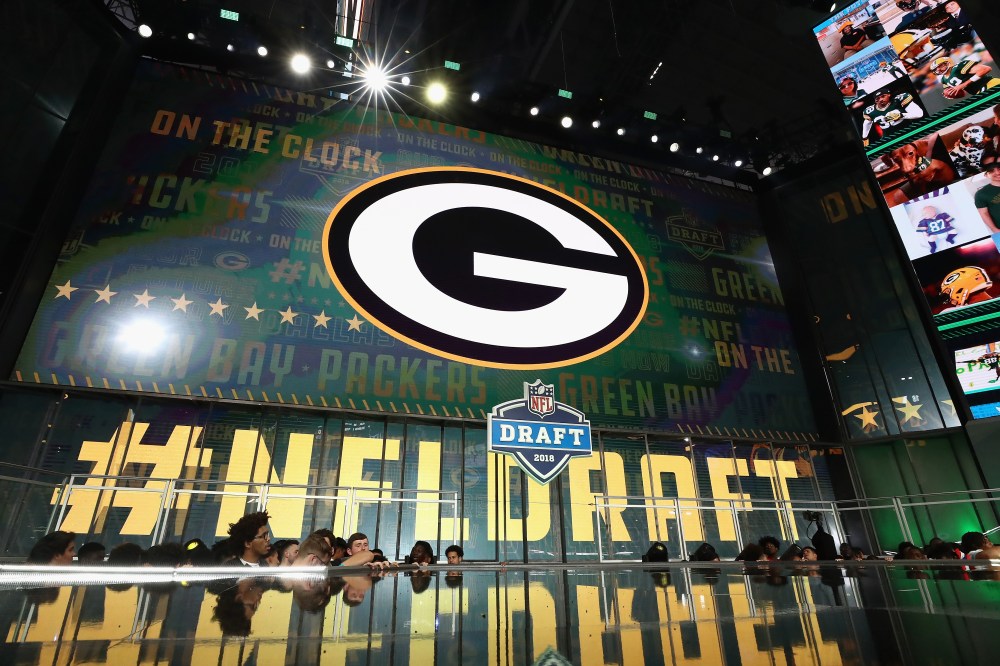