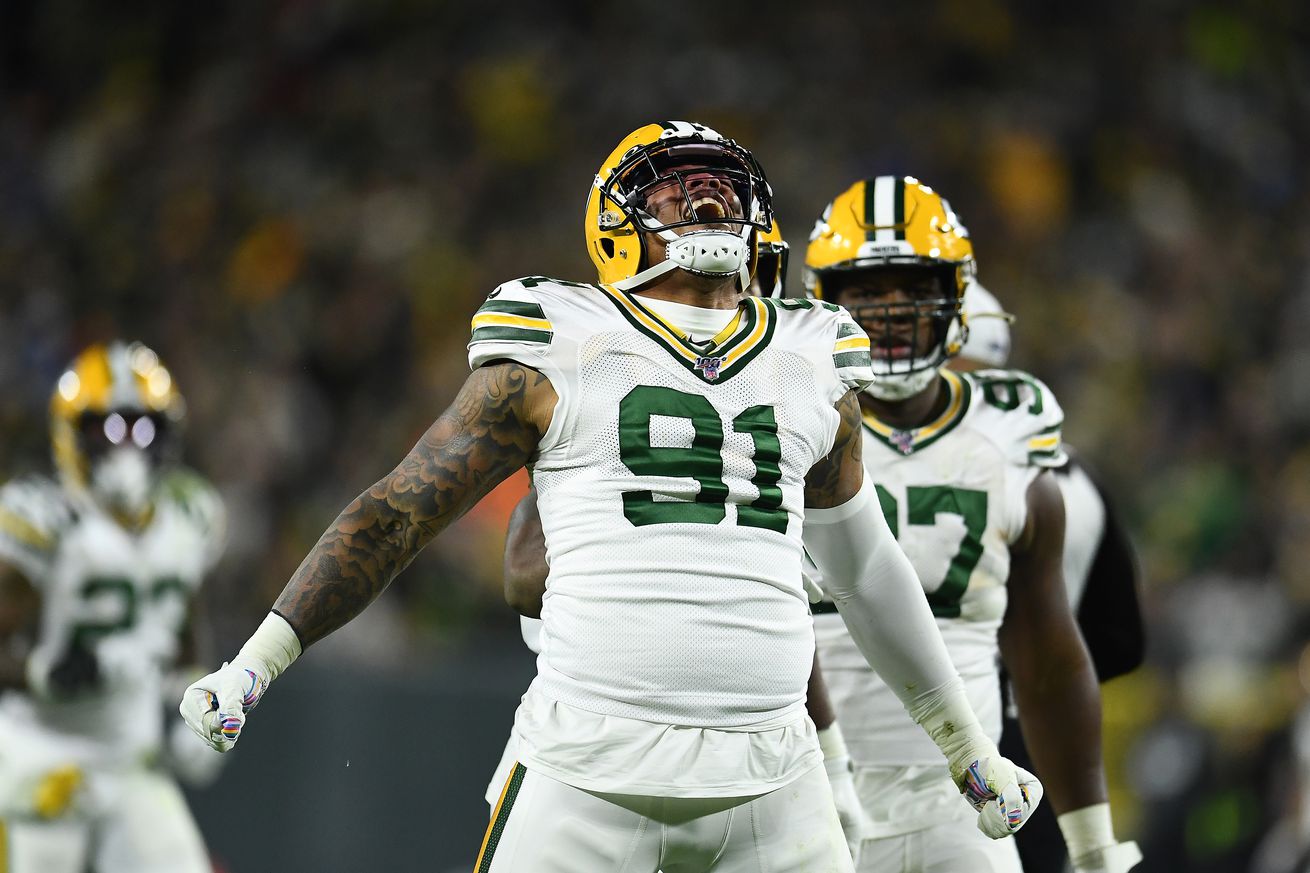 Preston Smith and the Packers defense dominated the second half to give Green Bay a shot at a win. | Photo by Stacy Revere/Getty Images

Blame the officials all you want, but the real story from Monday night was how Mike Pettine’s defense clamped Matthew Stafford and the Lions in the second half give Aaron Rodgers a chance to win it late.

A different Packers team — in fact, most of the Aaron Rodgers era — would have lost a game like Monday night against the Lions. That’s both literally and figuratively true as Green Bay hadn’t won a game -3 in turnovers since 2001, so let’s set aside the literal for a moment. What Matt LaFleur’s team faced against Detroit was a Murphy’s Law game.

A flea-flicker to start the game. An uncharacteristic fumble from Aaron Jones. Drops galore. Two turnovers off the hands of rookie Darrius Shepherd. It was the kind of contest where if you’re playing Madden, you restart the game because the computer has decided you’re just not winning, a metaphor made better by the fact the Lions have, for years, been the Packers’ little brother.

No way you’re letting your little brother win a lucky game like this.

The officials bear the brunt of the blame on social media for the Lions loss, but don’t be swayed by the cynicism and Twitter outrage. Detroit lost this game because it couldn’t capitalize on the Packers’ mistakes or its own self-created successes. Mike Pettine’s defense, particularly in the second deserve, deserve enormous credit for their performance after the sluggish start.

Pettine ratcheted up the pressure and his front started dominating at the point of attack, limiting the Lions to under three yards a carry on the ground. Even drives that started in plus territory ended in field goals rather than touchdowns.

In fact, in the second half, the Detroit offense drive chart looked like this:

The only drive ending in points in the second half that didn’t come off a turnover was the 34-yard drive and it took a 51-yard field goal from Matt Prater to make it happen. Kevin King bounced back from a rough first half, while Jaire Alexander turned the whole game into a bounce back after getting cooked by Amari Cooper last week. In other words, the Packers defense gave up just three points on drives starting in Detroit territory.

According to Pro Football Focus, he was responsible for just one completion, a short gain to J.D. McKissic where he stopped the Lions short of the sticks. Green Bay never gave the ball back after that third-down win.

Tramon Williams’ renaissance season surged on with another superb performance and the Smiths did what the Smiths do, becoming the first Packers duo in team history to each have six sacks through six games. Kenny Clark and Dean Lowry controlled the line of scrimmages and the linebackers cleaned up. After looking completely out of sorts in the first half with Darrell Bevell reading their mail seemingly every snap, suddenly this explosive Lions offense had insufficient postage.

A 22-13 game presents a manageable opportunity to Aaron Rodgers, even with a roster of receivers that wouldn’t bring scouts to the East-West Shrine Game. If even just one of those field goals turns into a touchdown instead, Green Bay likely lacks the firepower to stay within shouting distance.

Officials extended the two crucial scoring drives, but the Lions’ failures on basically every drive in the second half set themselves up in that position. Think of the Vikings game in Week 2, where the Packers jumped out to a 21-0 lead and had to hold on late. The same way the Vikings out-everything’d the Packers in that game, Green Bay did the same to the Lions, but in this case, Detroit hadn’t built a sufficient lead to hold an opponent vastly outplaying it in the second half.

The Lions lost this game in the first half, going up 13-0 instead of 17 or 21. In a game that was 13-10 at halftime, no team can put up 60 second-half yards and expect to win on the road. But the biggest reason they managed such a meager amount came from across the line of scrimmage. Pettine and his boys buckled down and gave Rodgers and his island of misfit receivers a prayer.

And the Lions know all too well the history of Aaron Rodgers and prayers.