The Packers had one of the best RB tandems in the NFL last season, and they’ll roll with the same duo in 2022. However, that might be the last season we’ll see the two-headed monster in Green Bay. Matt Schneidman of The Athletic writes that the Packers could move on from one of Aaron Jones or AJ Dillon next offseason. 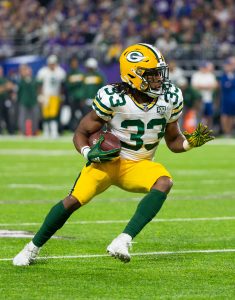 This isn’t a huge surprise if you look at Green Bay’s cap sheet. Dillon will be entering the final year of his rookie contract in 2023, and if he can match his breakout sophomore numbers (1,116 yards from scrimmage, seven touchdowns), then he’ll surely be pushing for an extension. Considering the Packers invested a second-round pick in Dillon, they’d presumably be willing to oblige.

However, it was only a year ago that the Packers inked Jones to a four-year, $48MM extension. That $12MM AAV ranks seventh at the position, and Green Bay could save themselves $10MM by cutting the veteran running back. It’d make sense for Green Bay to pivot that cap hit to the younger Dillon.

Following 2019 and 2020 campaigns where Jones combined for more than 3,000 yards from scrimmage while finding the end zone 30 times, the Packers pretty much split the RB carries evenly between Jones and Dillon in 2021. The move worked out for Green Bay, as they got 2,306 yards from scrimmage and 17 touchdowns from the duo.

“I think they feed off each other pretty well,” running backs coach Ben Sirmans said (via Schneidman). “It’s kind of a luxury because you can keep them both fresh throughout the game and then toward the end, you can either throw AJ in there to pound and wear the defense down or put Aaron in and all of a sudden the defense is worn down and it’s an explosive play. Having a blend of both those guys, that will continue throughout this upcoming season.”

If the Packers do move on from one of the two RBs next offseason, the other running backs on the Packers roster could parlay a solid 2022 campaign into a bigger role in 2023. Patrick Taylor and Kylin Hill are still around, although the latter could start the season on PUP. Green Bay also brought in a pair of undrafted free agent RBs in Tyler Goodson and BJ Baylor.