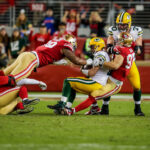 Many years ago my parents taught me, if you can’t say anything nice about someone, then don’t say anything at all. Well, I’ve been thinking since Sunday night how to write today’s article without sounding totally negative. I think I will use the words of coach Matt LaFleur, “out-coached, out-schemed, out-played and unacceptable.” I couldn’t agree more. The offensive game plan appeared almost McCarthy-like, how sad. The Packers set the bar high, by going 7-1 through the first 8 games and they need to produce the same effort over the last 8. Injuries have for the most part been avoided this season, so that can no longer be the excuse. There shouldn’t be any excuses at this point.

My main problem with Sunday’s non-performance, is the coaching staff had two weeks to prepare for the 49ers, while being able to watch two San Francisco games. It was difficult to watch from the first series. It didn’t help when a great play by a veteran WR (Devante Adams) out to the 40 yard line was negated by a foolish taunting penalty. That miscue led to the Blitz not being picked up by anyone, including Rodgers, which resulted in a Sack/Fumble which gave the 49ers 1st and Goal at the Packers 2 yard line. That set the tone and unleashed a relentless 49er pass rush which saw only one Packer Olineman grading out positively, Rookie Elgton Jenkins. Another disturbing sight, was QB Aaron Rodgers once again having to direct the young WR where to line up in formation. Really, Week 12, and they still don’t know how to line up for a play? No wonder the Offense continues to have Delay Penalties and snap times at 1 second on the play clock.

Speaking of the Oline, Bakhtiari must be playing hurt, because he has spent most of the last several games watching his man chasing down #12. Another huge disappointment is Geronimo Allison. He finished last season on Injured Reserve, and appears to not be 100%. His play this season is not what we expected after his 2017, and early 2018 performances. Valdes-Scantling, Lazard and Kumerow have had flashes of brilliant play, but when Adams was out. Since Adams return, LaFleur has not been able to find the proper mix for a successful passing game.

Mike Pettine’s defense is not without fault. They continue to allow big gains in the run, and explosive pass plays. Unfortunately that is not going to be a winning combination moving forward. Even though a soft schedule lies ahead for the Packers, no opponent can be overlooked at this point in the season. The three North Division games will all be tough, with two being on the road. The Packers cannot look past the Giants or Redskins as both teams have played well lately. Lafleur and Pettine will be coaching for their playoff life over the next 5 weeks.

The Packer players all claim they realize what’s at stake, and they have blown two opportunities to distance themselves from the hot Vikings. One can only hope they put their words into action. We all know “talk is cheap.” The Packers need to show up on the field and let their performance speak for them. Next up New York Giants on the East Coast! My pick Packers 34, Giants 20.