The Green Bay Packers are sitting at 5-1 this season, which is very surprising considering they have a new coach and a new offense to learn. All we heard during training camp was can Aaron Rodgers get along with head coach Matt LeFleur. The answer appears to be quite well. This looks like a new and improved Aaron Rodgers. Gone is the angry, my way or the highway QB of the Mike McCarthy era. 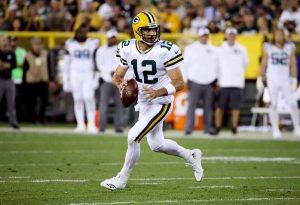 Rodgers has really taken to learning this offense and helping his teammates learn it as well. He’s not screaming or yelling at guys or making snarky remarks in his press conferences. Kind of reminds me of when McCarthy took over and had to reign in Brett Favre. With wins over all three division rivals the Packers are definitely back in the playoff hunt. While a visit to Buffalo Slots is always enjoyable, the Packers are once again making Sundays enjoyable in the fall.

One of the keys things I heard Rodgers say this season was that he has put up enough stats in this league, it’s all about wins now. While it always about wins, there is no denying that guys think about there numbers more when they are younger. Brett did, too. I like what I am seeing in Rodgers and he is getting better by the week.

The other old veteran leading the way is a guy I wanted cut at the beginning of the year – Mason Crosby. Crosby has been money so far this year and had two huge kicks in the win over the Lions Monday night. The game winner, of course, but the extra point on the Packers second touchdown was critical, and he had to do it from five yards farther back because of a penalty. Not a chip shot by any stretch.

Crosby won a hard fought battle with Sam Ficken in training camp and has proved me wrong since. Crosby, punter JK Scott, and long snapper Hunter Bradley have been the only bright spots on the Packers’ special teams. Crosby might lead the team in tackles on kickoff returns, but I digress.

The Packers have a trap game of sorts this weekend with the Oakland Raiders coming to town. While the showdown Patrick Mahomes is not likely to happen now, winning in Kansas City is never easy and a trip to LA follows that game. Rodgers and Crosby will have to keep this team on the right path. I think they are in good hands.

The post Old vets leading the way to 5-1 appeared first on Packernet’s View.