The National Football League, in all of it’s infinite wisdom, or should I say greed, is, as we all know, going to a 17-game schedule this year. Now that the season is just around the corner the reality of that is starting to hit home. I don’t think I really like it that much. 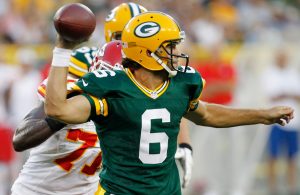 I do like the shortened preseason. Three game is plenty. Hard to believe that for most of my youth the NFL played six preseason games. And back then the starters would play the entire game for many of them. Definitely a different league now. I’m guessing you could bet on the league back then, but not like NFL football today, where you can get odds from multiple sports books in one place.

The biggest difference today is of course money. Back then most players had offseason jobs so they could pay the bills. Today most players are millionaires, making protecting them all the more important. So why the hell add another game to the schedule? Starters hardly play in the preseason now anyway, so you are not gaining anything there. Who knows, if the starters were still playing more and the players weren’t bitching all the time, we might never have seen the 17 game season. If it ain’t broke, don’t fix it.

I actually love preseason games. You get to watch your team play and not care who wins or loses. It’s fun to watch the young players fighting for their NFL lives. The NFL is a game of attrition, so these young guys could be the difference between winning or losing for a team hit with injuries. You get a good feel for your team’s depth in the preseason.

Now, after 42 years we have to adjust all our main stats again for judging players. Now you only need to average 58 yards a game to be a 1,000 yard rusher. A 4,000 passer only needs 235 yards a game. And the odd number is stupid. Nobody should have to play more road games than home games.

In the end it’s more money for everybody, so I’m sure it won’t be long until we are at 18 games. Not good.

The post Not a fan of 17 games appeared first on Packernet’s View.