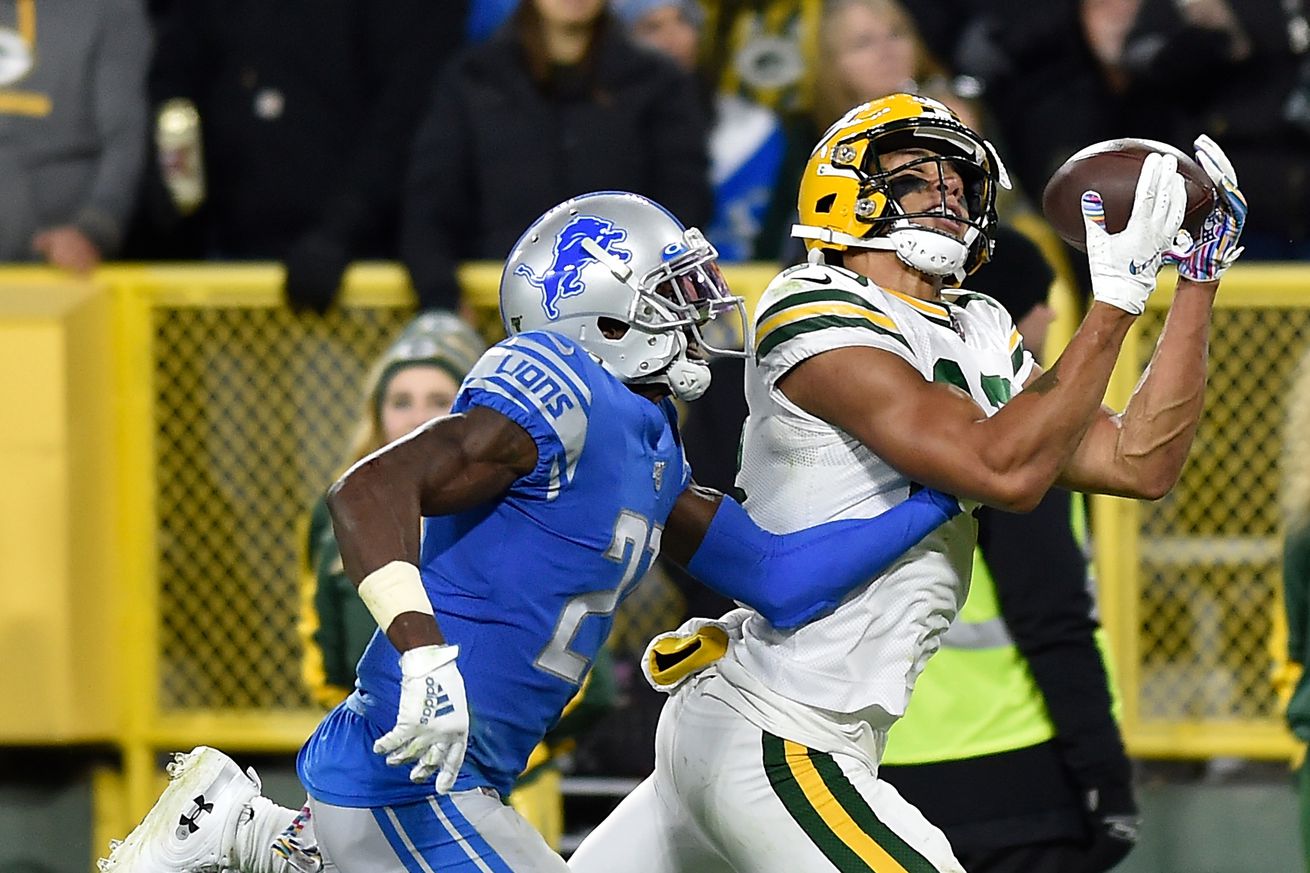 This beautiful throw-and-catch for the touchdown cut the Lions lead to 22-20 late in the fourth quarter. | Photo by Quinn Harris/Getty Images

Given the struggles of Geronimo Allison and Darrius Shepherd, and the lack of impact play from Jake Kumerow, it’s not unreasonable to suggest one half of football is enough to earn Allen Lazard a bigger role in the offense.

Back in August, Allen Lazard half-joked he’d be willing to play defense if it meant making the Packers and helping them win a Super Bowl. Aaron Rodgers singled Lazard out during training camp, highlighting the effort and progress the former Iowa State standout made in his second year with the team. When Lazard didn’t land on the 53-man roster initially, Rodgers later admitted to being worried another team would snatch him up. If they had, Green Bay may not have come back to beat the Lions 23-22 on Monday night.

The 6-foot-5 Lazard caught four of the five balls thrown his way for 65 yards, a touchdown and a critical first down late in the game. The knee-jerk reaction would be to say Lazard deserves to be on the field more after that performance. In this case, the knee-jerk case isn’t reactionary to a fault. It’s the right move. Given the way Geronimo Allison has struggled and Jake Kumerow has failed to make an impact, a performance like Monday night rightfully elevates Lazard as someone who earned more reps.

“I may have put in a good word there in the fourth quarter to get him some opportunities,” Rodgers said after the game.

Not coincidentally, that good word seemed to come after a ball doinked off rookie Darrius Shepherd’s facemask into the waiting arms of Justin Coleman on the goal line. Lazard entered the game the very next drive playing in Shepherd’s slot position where Rodgers looked to him almost immediately. The hulking receiver couldn’t come down with a contested ball he nearly ripped away from Coleman, but a lack of results didn’t sway Rodgers’ faith in him.

“Having his trust and belief in me instilled a huge amount of confidence in being able to go out there and play comfortably,” Lazard said.

“For him to call my number is huge for me. To be able to go out there and make the play was awesome.”

That faith, for Rodgers more than most quarterbacks, stands as a reason unto itself to give Lazard a chance, particularly if Shepherd’s two turnover night swayed his quarterback into believing he was unreliable in the future. Sure, it’s nice for Lazard to be buoyed by his quarterback’s belief in him, but exponentially more important the other way around.

How much longer can Rodgers believe in Allison who has had drop problems to the point of comedy at times this season? Kumerow supposedly has the belief of the quarterback, but Rodgers eschewed Kumerow underneath a number of times Monday in favor of deep shots, including the monumental play for the touchdown in the fourth quarter. Kumerow had the first down easily, but Rodgers gave Lazard, who wasn’t open by any reasonable standard, a shot to make a play. The touchdown was the most unlikely completion of the season for Rodgers according to NFL’s Next Gen Stats.

“To catch a touchdown in a critical moment is something huge and something that, as a kid, you grow up dreaming about. It feels great to fulfill it,” Lazard said.

Perhaps more than that, it empowered the young receiver to believe he could continue to win his matchup against Coleman, the Lions’ best cornerback this season with Darius Slay hurt. By the next drive, Lazard was calling for the ball.

“The big first down we had to him on the out route, that was him coming back to the huddle and telling me what play he wanted,” Rodgers said after the game.

“For a young guy to do that, how can you not have confidence in that? So, Matt (LaFleur) was between one of two plays, I said go with the first one because I’m going to throw it to Allen and we’re going to move the sticks, and we did.”

Lazard would later joke he told Rodgers to throw it to him every time. Or was it a joke?

He believes he can be an impact player. Clearly Rodgers believes it too. Given the struggles of Allison and Shepherd, along with the lack of impact Kumerow has made to this point, it’s easy to reach the conclusion Lazard will see the field more often moving forward. Rodgers’ judgment in these situations is hardly fallible. He loved Jared Abbrederis and Ruvell Martin too. But Lazard backed up the confidence his quarterback has in him and in doing so, put himself to be in position to play more often even once Davante Adams returns.

Lazard, Allison and Kumerow in particular share skillsets as big, reliable possession receivers. The problem for Allison has been the reliability part. He hasn’t been. And Kumerow doesn’t show much beyond his big 6-foot-4 frame.

We’ve seen Lazard make contested catches, third-down catches, deep ball plays, and run with physicality after the catch to the point he tried to run through Coleman on the game-winning drive. He showed more juice, more verve in two possessions Monday than we’ve seen from the other receivers all season outside of Adams and MVS. He’s earned a chance to prove it once again.