A big week for Packers news, coming in advance of Monday’s annual franchise shareholders meeting, naturally centers on Aaron Rodgers. The Packers report to training camp Tuesday, and nothing about the reigning MVP’s offseason points to him being on the field. 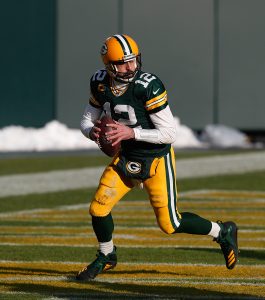 Rodgers has continued to train as if he will play in 2021, however. Packers left tackle David Bakhtiari shared a photo of he and Rodgers working out this week at Proactive Sports Performance in California (h/t Fox 6’s Lily Zhao). A Proactive Sports Performance representative also said, via ESPN’s Jeremy Fowler, that Rodgers is “working and he’s ready” for the season.

Rodgers’ desire not to play for the Packers again has become fairly clear. He missed OTAs for the first time in his career and skipped minicamp. The Packers, however, retain his rights and have budged from their stance against a trade. This staring contest is set to push into camp, and Las Vegas has made some interesting adjustments regarding the Packers and NFC North.

The Westgate SuperBook closed its NFC North betting, and two other Vegas sportsbooks revealed to SI.com’s Bill Huber the expectation is Rodgers will announce his retirement before the Packers report to camp. The 37-year-old quarterback was linked to retirement early in this impasse, and the move would remind of Carson Palmer‘s 2011 retirement — a move the then-31-year-old passer made to force the Bengals’ hand. That play ended up working, though Cincinnati kept Palmer in retirement until the trade deadline that October.

Any Rodgers trade package would surpass what the Bengals collected for Palmer — a 2012 first-round pick and a 2013 second-rounder — but the Packers have held firm for months here. So has Rodgers, who turned down a deal that would have (again) made him the NFL’s highest-paid player. Although it is not known how that proposed extension was to be structured, this standoff is not believed to be financially motivated.

The team is winding down its most turbulent offseason since at least 2008, with Davante Adams‘ ending extension talks this week adding to this drama. While Packers teammates believe Rodgers will be with them this season, per Pro Football Focus’ Doug Kyed, his holdout stands to intensify Tuesday.