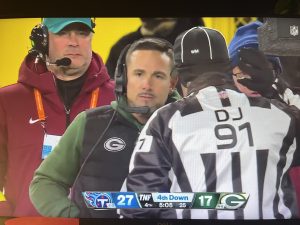 It is doubtful that many Green Bay Packers fans turned on Week 11’s Monday Night Football game. Unless they had wagers placed on the game, it is doubtful many had an interest in watching the San Francisco 49ers dismantling the Arizona Cardinals. But what the 49ers are doing, especially on offense, Packers fans should be taking notice of. What 49ers head coach Kyle Shanahan is accomplishing, is something only Matt LaFleur can dream of doing this season.

A lot of people like to think that Matt LaFleur is a part of Sean McVay’s coaching tree. LaFleur did spend one season under McVay with the Los Angeles Rams as McVay’s non-play-calling offensive coordinator. But really, LaFleur is a spawn from Kyle Shanahan’s coaching tree.

In Matt LaFleur’s coaching career he has worked with Shanahan on three different coaching staffs. While Shanahan was the offensive coordinator for the Houston Texans, then Washington Redskins, and the Atlanta Falcons, LaFleur served in some capacity on those offensive staffs. LaFleur’s offensive principles are deeply connected to what he learned from Kyle as well as Kyle’s Dad, Mike Shanahan.

Along with spending time with each other in past stops, the connection between the two doesn’t stop there.  Both Shanahan and LaFleur played quarterback in college (Shanahan at Florida, LaFleur at Saginaw Valley State). LaFleur’s younger brother, Mike LaFleur, also worked under Shanahan. He served as Shanahan’s pass game coordinator for the 49ers from 2017-2020.

Shanahan and the 49ers are doing what many thought LaFleur’s led Packers squad would do this season. That is having a dominant defense and an offense that can hit timely passes and run the ball successfully.

49ers Offense Knows Who They Are

While the 49ers offense wasn’t matching up against an elite Cardinals defense on Monday night, what they did was still impressive.  It isn’t just that the 49ers scored four times through the air and one-time rushing, it’s how they did it that should make Matt LaFleur and Packers fans envious.

The 49ers ability to set up the pass with the run was on full display Monday night. The 49ers top four ball carriers rushed for 149 yards on just 23 carries. Establishing the run, and sticking with it, it opened up the play-action passing attack. Shanahan also utilized motion frequently, faking jet sweeps occasionally, making the Cardinals defense have to honor the run. Their offense did what Matt LaFleur has said he wants to do with the Green Bay Packers offense. But something he has failed to do this season.

It’s difficult to call 49ers starting quarterback Jimmy Garoppolo a weakness, at least this season. But when he took over for Trey Lance, Shanahan knew that the 49ers offense had to be run this way to get the best out of Garoppolo. That style has allowed Garopplo to throw for 15 touchdowns, only four interceptions, and earn a quarterback rating of 104.1.

Garoppolo, at best, is just an above-average quarterback. But with the offensive identity, Shanahan has established, he has made Garoppolo look even better. Think if LaFleur could have established that identity this season, by having an elite quarterback like Aaron Rodgers. It would have made the Green Bay Packers offense one of the best in the NFL.

Lynch Has Done What Gutekunst Hasn’t

When general manager John Lynch went from the broadcasting booth to the 49ers front office, many questioned the hire. Lynch had no scouting experience and had never worked in an NFL front office. But Lynch has proven that he was more than up for the task.

Wide receiver Brandon Aiyuk, who caught two touchdowns on Monday, was selected in the first round of the 2020 NFL Draft. Deebo Samuel, who not only is a threat through the air but also a runner, was drafted in the second round of the 2019 NFL Draft. He caught seven passes for 57 yards and also carried the ball three times for 37 and had a touchdown carry. Starting tight end George Kittle, who was selected in the fifth round in Lynch’s first draft as 49ers general manager, caught four passes for 84 yards with two touchdown receptions.

During Gutekuns’t tenure as Packers general manager, he has never made a major trade that has brought more offensive weapons to Rodgers and the Green Bay Packers offense. Randall Cobb was traded for, but that was on the demand of Rodgers. He makes a lot of “calls” but has never sealed the deal. But unlike Gutekunst, Lynch has sealed the deal and did more than just make a call.

He was able to make a deal with the New England Patriots to bring over Garropolo in 2017. This season, he swung a deal with the Carolina Panthers to bring over multi-purpose running back Christian McCaffrey. Garropolo threw for four touchdowns on Monday. While McCaffrey rushed for 39 yards on seven carries and also caught seven passes for 67 yards.

Along with never making a major deal to bring in an offensive weapon, Gutekunst hasn’t done much else through the draft to help the Green Bay Packers offense. The highest he has ever selected a wide receiver was this year when he selected a very raw, but explosive, Christian Watson. In free agency, the only wide receiver he signed this season was the oft-injured Sammy Watkins. His lack of offensive moves could be why Matt LaFleur hasn’t accomplished an identity for the Packers offense as Shanahan has done with the 49ers offense.

A Defense to Lean On

Excluding 49ers defensive lineman Nick Bosa, on paper, the Green Bay Packers defense possesses more talent than the 49ers defense. Some might disagree, but if you take a deeper look, it is hard to argue.

The Packers have an elite cornerback in Jaire Alexander. On the defensive front, the Packers have Kenny Clark, Preston Smith, and the now-injured Rashan Gary. They also spent big money to keep linebacker De’Vondre Campbell and cornerback Rasul Douglas. Although both have had disappointing seasons.

Talent-wise, the Packers have the more talented defensive roster. But if you had to choose one defense to lead your NFL team to a Super Bowl berth, it wouldn’t be the current Packers defense. The driving force for this is the person who coordinates the Packers defense.

Since taking over for Saleh, Ryans has done a fantastic job with the 49ers defense. His success has propelled him to the list of possible head coaching candidates. Ryans is a young innovative defensive coordinator. His ability to lead the 49ers defense has made Shanahan’s job on offense easier. But while Shanahan found another young innovative successful defensive coordinator, the same can’t be said for LaFleur.

When it was time to replace Mike Pettine, LaFleur hired a defensive coordinator retread, Joe Barry. Barry, a failed two-time defensive coordinator, has done a horrible job with the Packers defense. His inability to make a talented defense even adequate has hurt what LaFleur has said he wants to do on offense. But it’s hard to feel sorry for LaFleur. Not only did he completely miss on the hire, but he has refused to cut bait, costing the Packers.

Learn a Thing or Two From the 49ers

There isn’t much doubt that Matt LaFleur learned a lot working with Kyle Shanahan. But LaFleur could learn a thing or two watching Shanahan now. Shanahan, and the 49ers, are playing like the Packers should be. His defense is run by a coaching star in Ryans, and his offense is doing what LaFleur’s offense should be doing.

Gutekunst also could learn something from how John Lynch runs the 49ers. He has given his offensive-minded head coach the necessary weapons to have a successful offense. From lack of moves and at best shaky draft classes it’s hurt his head coach’s offensive success.

This will be a long off-season for the Green Bay Packers. Not only do they need to look within on what went wrong, but they need to look at teams that are similar and that have found success. The latter should start by looking at the San Francisco 49ers.