The football season will begin on Thursday.  You might even be reading this after the season began.  If so, you will probably get a smile on your face even if the Bears found some way to beat the Packers in Chicago in front of the entire football world.

That’s because Chicago Bears fans are possibly the most paranoid group of football fans around and the Packers bring out their paranoia far more than any other team can!  For most of the last 60 years, rooting for the Bears has been like spending money to go play casino games at a land based casino instead of playing comfortably at an online casino!

Chicago’s Hopes for Eternal Salvation Lie with the Bears 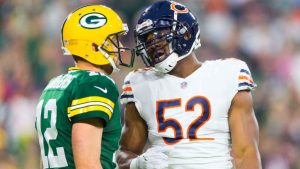 But if the Bears aren’t good enough to get to the playoffs, there will be aggressive wailing and gnashing of teeth.  If the Packers beat the Bears in Soldier Field to start the season the hot air balloon that is the ego of the average Bears fan will not just burst, it will explode!

An Example from Baseball

It is a cliché that the baseball season is a long season.  A best selling book by that title was published over 50 years ago and it is still true.  So, when the Cardinals were apparently out of the playoff chase, Cubs fans rejoiced.  Now, the tables have been turned and the Cubs are looking at a winter of discontent.

What if the Packers Lose?

It’s a long season!  The Bears will have to win a lot of games against very strong opponents to get to the playoffs.  The Packers have time to get back on track.  After all, they were playing a really good team on the road.  There’s plenty of time to make up for a little lost ground.

What if the Bears Lose?

The reaction in Chicago will be uniform: the Bears suck!

Football fans in Chicago have made a huge emotional investment on the 2019 season.  They are already trying to downplay every weakness in the Bears’ armor.  Is Mitch Trubisky a Super Bowl quarterback?  He might be but Bears fans are already saying that Trubisky needs only to be adequate and protect the ball for the defense to take the team to the Super Bowl and beyond.

Is Ha Ha Clinton-Dix a strong replacement for Adrian Amos?  Maybe he is.  But there is a reason that Clinton-Dix bounced around the league last year.  Can he put a good season together?  Bears fans are already saying that the Bears have a great secondary even if Clinton-Dix has an off year.

Every team has weaknesses and every fan base has unrealistic expectations.  Bears fans have seen so many disappointments in the last 60 years that they have to tell themselves fairy tales in order to develop a “realistic” outlook on the upcoming season.

The Legacy of Vince Lombardi

The Packers were long term also-rans in the 1950’s.  Then the team hired Vince Lombardi as head coach.  He won many championships but his enduring legacy is that any weaknesses can be overcome.  No team is perfect.  Packers fans have learned that no season is lost until it is officially lost.  Then it is the job of the management team to replace the players who need to be replaced, draft well, and move forward.

When a Bears season is officially lost, Bears fans contemplate the next ten years as certainly to be a lost decade.

“On paper” is a serious misnomer in football.  First of all, “on paper”t is usually a reflection of past performance, upside and potential, and wishful thinking.  This off season, Bears fans have been saying that the Bears are a Super Bowl caliber team “on paper”.

Now that the conjecture season is over and the games have to be played on a football field, Bears fans are in a terrible panic that they will once again be severely disappointed by the common failure of their team.

Nonetheless, the Bears do look formidable on paper.  They have an outstanding defense.  If the defense comes close to the performance of last year’s defense, the Bears will not be blown out of any games this year.

The Bears have added some pieces on offense.  David Montgomery looks like a solid replacement for Jordan Howard.  Howard was a traditional powerful Bears running back whose skill set was more conducive to a 1960’s or 1970’s style offense.  He lacked skills in the passing game.

The Bears have added more playmakers in their receiving corps.  So, the Bears look really solid both on defense, the team’s traditional strong suit, and on offense.

Here is where the Bears will either thrive this year and for years to come or will falter as Bears teams have done so often in the past.  Matt Nagy is a coach who never excelled as a player.  This is a very well-known phenomenon in baseball but it is less well-known in football.

The Bears are hoping that Matt Nagy will establish a legacy similar to the legacy Vince Lombardi established over 50 years ago.  If he does, the Bears will be strong this year and beyond.

If Nagy doesn’t take the Bears the next step forward, Aaron Rodgers and the Packers will find a way to beat them on Thursday, will find more ways to win enough games to take the division away from the Bears again, and will break the collective hearts of Bears Nation.

The post How Will Bears’ Nation React to a Loss on Opening Night? appeared first on Packernet’s View.