It’d be safe to assume the top highlight from a wide receiver would be some kind of circus catch, an incredible individual effort after a catch, or some combination of both.

Nothing can be assumed with Green Bay Packers rookie receiver Christian Watson.

North Dakota State wide receivers coach Noah Pauley, who was back in Green Bay as part of the Bill Walsh Diversity Coaching Fellowship for a part of this offseason, recalls a much different type of play as his favorite from Watson during his collegiate years in Fargo.

Pauley pointed to a 75-yard touchdown run by Dominic Gonnella on the first play of the second half during the 2021 season opener against Albany. Watson, who was lined up opposite of playside, first blocked the safety, then chased down the play to cut off another defender in pursuit down the sideline, and then finished the play by delivering a crushing block on the last defender to clear the path for the score. In all, Watson took three different would-be tacklers away from Gonnella, who wasn’t touched after breaking the initial tackle at the line of scrimmage.

“That’s my favorite play of all time of Christian Watson right there,” Pauley told Matt Schneidman of The Athletic in a recent profile of Watson.

The video can be viewed here. The play Pauley mentions begins at the 4:53 mark.

The 75-yard touchdown run broke up a close game and helped North Dakota State open the season with a 28-6 win. Watson caught only four passes for 37 yards, but his run blocking – an asset of his entering the NFL – sparked a huge play in the contest.

You can bet Matt LaFleur and the Packers loved the highlight.

In Green Bay, LaFleur demands blocking effort and execution from his receivers.

Sure, Watson – at 6-4 and 208 pounds – is big and fast. But can he block? Is he willing to sacrifice for others, to do the dirty work required of playing the position for the Packers?

LaFleur has no doubt.

“He’s big, he’s fast, he’s physical,” LaFleur said last month. “One thing I really liked was, when you watch him block, I think that says a lot about a player, especially at that position. We know those guys, they want to go there and get the big plays, but what are they willing to do for their teammates? I watched his run-blocking reel, just to see the effort he gave, down in and down out, in that aspect of the game, I mean, we can always use somebody like that. Especially when you’re talking about a 6-4 guy, over 200 pounds, runs sub-4.4. So there’s a lot to be excited about there.”

The clip noted by Pauley highlights everything LaFleur wants. It was the initial execution of finding the safety at the second level and taking him out of the play. It was the effort to find the ball carrier and chase the play. And then it was the willingness to put his body on the line to finish the play for a teammate. That’s all blocking is. Know-how, effort and execution. Watson checked all three boxes in one incredible play.

Even as a rookie in a system that demands so much from receivers, Watson has a terrific opportunity to play as a first-year player in 2022. He can run like the wind, providing a legitimate deep threat in place of Marquez Valdes-Scantling, and he can block, which immediately puts him in line for playing time in LaFleur’s scheme. As Randall Cobb said after just a week of OTAs, Watson has “the total package.” Now, it’s about putting it all together as a professional in Green Bay. 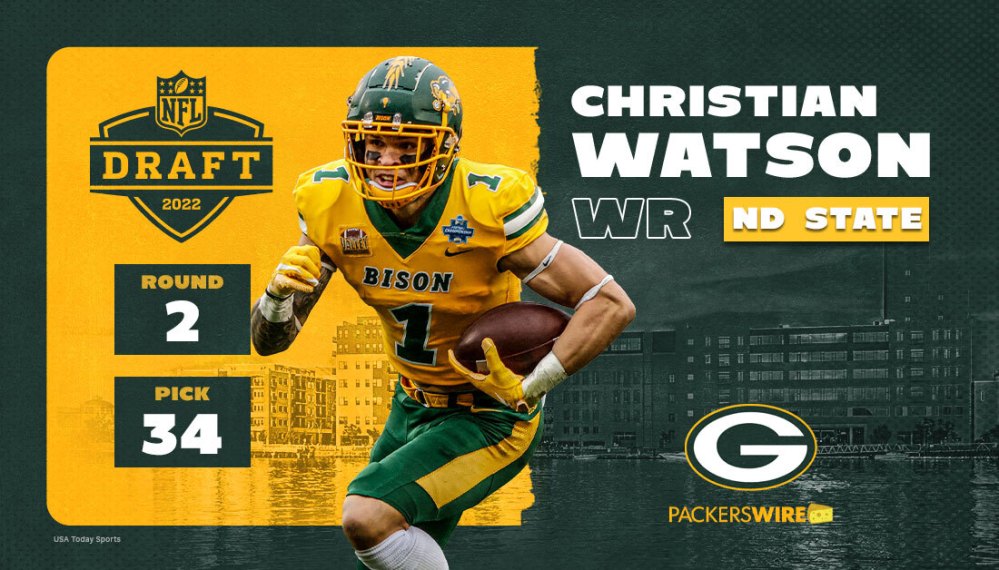