After being one of the more hotly-debated draft picks in the 2019 draft, Rashan Gary is eligible for his second NFL contract. Considering the progress he has made in each of his three seasons with the Packers, he could be in line for a more substantial raise than many would have thought when he entered the league.

The 24-year-old spent three years at Michigan, after being one of the top recruits in the country. That led to significant expectations, but Gary didn’t put up the production many other top edge rushers were able to in his draft class in particular. His sophomore season was his best, as he totalled 58 tackles, including 11.5 for a loss, and 5.5 sacks. Overall, he recorded less than 10 sacks during his time in Ann Arbor.

That represented a major red flag for many in the build-up to the draft. PFF rated him much lower than many of the other pass rushers in the class, including his Michigan teammate Chase Winovich. Still, Gary represented a rare combination of size (six-foot-five, 280 pounds) and athleticism which kept him on the first-round radar. It didn’t come as a shock, therefore, when the Packers drafted him with the No. 12 pick. 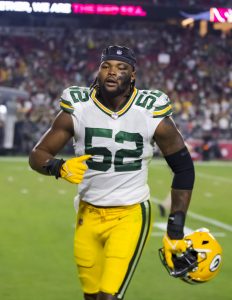 That made Gary the fourth edge rusher taken off the board, taken behind the likes of Nick Bosa and Josh Allen. He heard his name called earlier than other, more accomplished college sack artists like Brian Burns and Montez Sweat, however, meaning that he was once again entering the next chapter of his football career with significant expectations. The early portion of his NFL tenure didn’t put concerns about his high draft stock at ease.

As a rookie, Gary appeared in all 16 contests, but he didn’t register any starts. Seeing the field for just one-fourth of the team’s defensive snaps, he totalled 21 tackles and a pair of sacks. He saw a larger workload the following season, and responded with a step forward in production, with five sacks. Likewise, his PFF grade rose incrementally, leading to optimism for the 2021 campaign.

With Za’Darius Smith sidelined for all but one game due to injury, Gary took on a full-time starting role this past year. He thrived in it, posting 9.5 sacks and 28 QB hits en route to a top-five edge rush PFF grade of 89. It presented an interesting dichotomy with Winovich, who, after a promising start to his career in New England, failed to record a sack in 2021 and has since been traded to the Browns.

The aforementioned Smith left in free agency this offseason, as Green Bay turned its attention to extending fellow veteran Preston Smith. He and Gary are in line to start once again in 2022, meaning the latter will have the opportunity to repeat his performance from last season. Knowing that, it came as little surprise when the Packers exercised Gary’s fifth-year option, keeping him under contract for the next two campaigns. He will have a cap hit of just over $5MM in 2022, a figure which will jump to $10.9MM the following year.

If he is able to continue his career ascension, Gary will represent one of the better values at the edge rusher position in the league at that cost, as 17 players at that spot currently average at least $15MM per season. Given his relatively late blooming, however, it would be understandable for the Packers to wait at least one more year to begin serious extension talks. The team’s overall financial situation in the near future will also, of course, be an important factor in this situation.

The Packers have more cap space than most teams at this point with respect to 2022, after trading away Davante Adams and restructuring a number of large contracts. However, the outlook is more murky beyond this coming season. Gary will need a new contract no later than 2024, by which point Aaron Jones, David Bakhtiari and Kenny Clark will each be entering the final (non-void) year of their respective deals. How the team handles those pacts will no doubt affect their ability to extend Gary at a significant rate.

Gary is aware of the importance of this season as it relates to his next contract. When speaking on the matter however, he said, via Sports Illustrated’s Bill Huber, “When it comes to money, that’s something I don’t worry about. I’m here to play football and I’m here to be the best player I can for this team.”

Still, he called a lucrative extension a “dream… But I’ve got to keep my head down and work and not look too far ahead or all this talk is just talk.”