The Packers will be without their No. 1 wide receiver on Sunday in Dallas. They’ve ruled out Davante Adams, who suffered a toe injury against the Eagles. 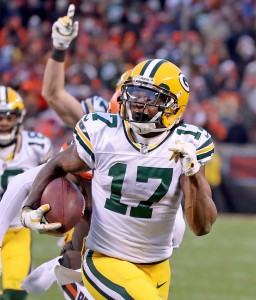 Adams did not practice this week. This will thrust Marquez Valdes-Scantling and Geronimo Allison into roles as Aaron Rodgers‘ top targets against the Cowboys. Adams has occupied this role over the past two seasons, becoming one of the NFL’s best receivers in this span.

While the turf toe issue the sixth-year standout has encountered is not believed to be a long-term problem, it will give Green Bay one of its least experienced receiving corps of the Rodgers era for this particular game. The Packers let Randall Cobb defect to Dallas this offseason, leaving MVS and Allison as Adams’ top complements. They will now see greater responsibility in a pivotal NFC game.

Adams sits in the top five in receiving yards and touchdowns since the start of last season. The Packers gave him a $14.5MM-AAV deal late in the 2017, when he had yet to produce a 1,000-yard slate. Adams did so last season, getting to 1,386 yards.