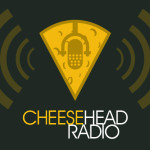 Booger McFarland may not have been happy about the officiating, but in the end, the Green Bay Packers eek out a win over the Detroit Lions, climb to 5-1 and 3-0 in the NFL North. With the Raiders on the horizon, things are looking good for the Packers on paper, but not so much on the injury report.

Join us as we discuss the controversial hands-to-the-face call, the depleted wide receiver corp, and the resurgence of Jamal Williams. You won’t want to miss a second of this week’s winning Cheesehead Radio!

Join us for our segments of “Who Moved My Cheese”, “The Playbook”, “Hot Pockets”, and “Packer Season Predictions” as we prepare for the start of a new era in Packer football!

Join co-hosts CD Angeli, Jersey Al Bracco, and Kelly Hodgson-Kline. We’ll be with you every game this season, so listen in live and start out the week on the right track.