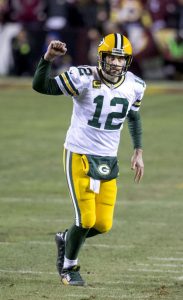 Aaron Rodgers is still the unquestionable heart and soul of the Green Bay Packers in the 15th season of a storied NFL career.

Not that that’s particularly surprising. In the era of Brady, Brees, Peyton Manning et al, elite QBs are seemingly ageless. The great ones have a sense of when to hang up the jersey before the public ever sees the point of diminishing returns. Rodgers fits the description of a “great one” with a lot of miles left on the tread.

The Packers have failed to make the playoffs since 2016 when they reached the NFC Championship before sputtering out in a 41-21 loss to the Falcons. The current two-year drought is the longest of Rodgers’ career as the starting signal caller (Green Bay also missed the postseason in 2005 and 2006 when Rodgers was the backup to Hall-of-Famer Brett Favre).

After consecutive third-place NFC North finishes in 2017 and a season go, Cheeseheads are justified in wondering if Rodgers is on an insurmountable decline, at least on the surface.

Dig into the numbers, however, and it becomes apparent that Rodgers is just as effective as he’s always been. Entering this season, The Sporting News ranked Rodgers as the NFL’s second-best QB behind whiz kid Patrick Mahomes of Kansas City.

After a broken right collarbone suffered in Week 6 sidelined Rodgers for the remainder of the 2017 season, the two-time MVP rebounded nicely in 2018. He threw for 4,442 passing yards with a completion rate in-line with his career average.

Rodgers is at it again in 2019. The expectations for Green Bay to win the NFC North rest squarely on the shoulders of number 12. The Pack will go as far as Rodgers will take them.

And that could mean a Super Bowl LIV appearance on February 2, 2020.

While it’s a little premature for Cheeseheads to be assured they’ll be swapping a chilly week on Lake Michigan this winter for sunshine in Miami, the groundwork is underway. The Packers and Bears are tied for first place in the NFC North with identical 3-1 records after four weeks.

Rodgers’ passing numbers are strikingly consistent with past season performance when projected out for the remainder of this campaign.

Extrapolate those numbers through 16 games, and Rodgers finishes out the regular season with close to 4,300 yards, 370 completions, and 25 touchdowns–nearly identical numbers to 2018.

There are QBs around the league posting flashier numbers all-around than Rodgers has so far. His QB rating currently stands at a midling 95.4. That’s 18th in the league.

But fewer QBs are helming teams with Green Bay’s record and sunny forecast. The widespread expectations that the Packers will win the NFC North rest squarely on the shoulders of Rodgers. Green Bay will go as far as the All-Pro will take them in 2019.

One Game at a Time

Rodgers is performing consistently when we drill down to per-game performance.

Rodgers connected on 17 of 29 passes for 235 yards and a score during the 27-16 routing of Denver in Week 3. Despite dropping a tough Week 4 contest to Philadelphia 34-27, Rodgers exploded for 422 yards on 34 completions with two touchdowns and a pick in the mix.

The passing volume is no slight against Rodgers. The Pack seems comfortable with the available run options in Aaron Jones and Jamaal Williams despite the lack of breakout games for either. Jones, in particular, has been a red zone drill averaging a score per game on short yardage overall.

The road towards the mid-season point poses a couple of challenges for Green Bay. The Pack heads south to take on an NFC East-leading Dallas (3-1) squad Sunday. Week 8 sees the Pack in an interconference away clash against Mahomes and Kansas City (4-0), the first place residents of the AFC West.

Two home games stand between. Detroit enters Lambeau in Week 6 while Oakland ventures to town for a Week 7 showdown. 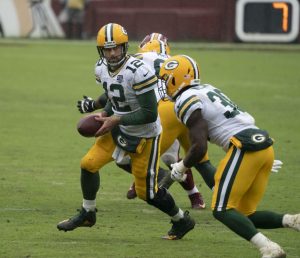 Wideouts Davante Adams and Marquez Valdes-Scantling lead the receiving corps with a combined 64 receptions and 595 yards. Geronimo Allison is adding value in the end zone–two of his eight receptions are touchdowns.

While Jimmy Graham is catching plenty of flack in the press lately, especially for botching a potential touchdown against the Eagles, the veteran TE remains a favorite target of Rodgers. He’s already equaled his season touchdown reception total from 2018 with two and is on pace to put up some decent yardage.

On the flip side of the ball, the Packers defense is playing a notably aggressive game in 2019. New LBs Za’Darius and Preston Smith have punished opposing quarterbacks each week. Second-year CB Jaire Alexander is proving he can single-handedly shut down any receiver he faces.

There’s a reason why so many media outlets pegged the Pack as a playoff-caliber team prior to the season. Rodgers continues to deliver at consistent levels and commands the heart and soul of the team. We’re not packing for Miami yet, but we’re moving the suitcases to the front of the closet just in case.

The post Breaking Down Rodgers By the Numbers at the First Quarter Mark appeared first on Packernet’s View.