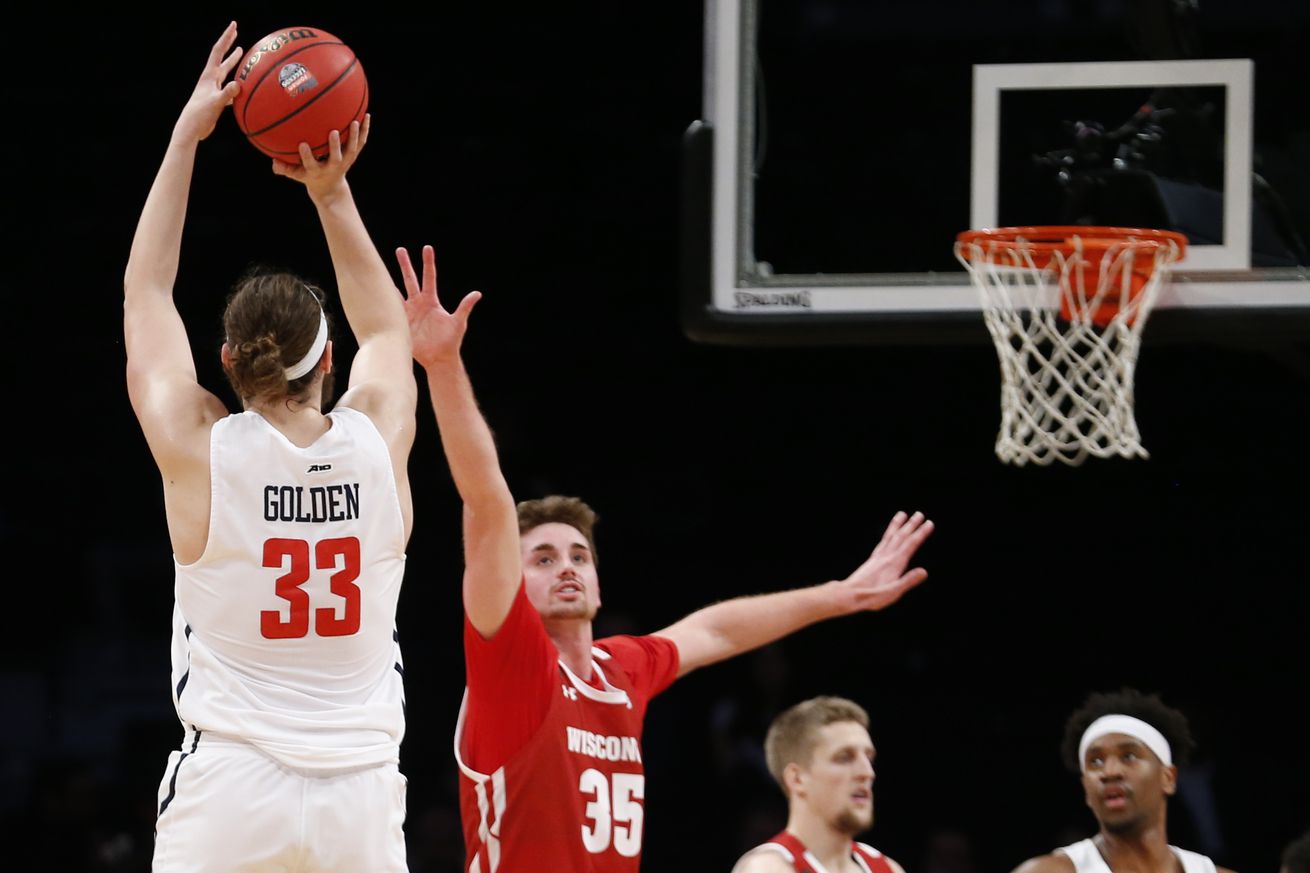 Taking on the Richmond Spiders (5-0) as part of the Legends Classic in Brooklyn, the Wisconsin Badgers (4-2) came in sporting a four game win streak. The undefeated Spiders came in with four wins of their own, led by a trio of guards each averaging 18 plus points per game.

In an early season neutral site matchup at the Barclays Center, Richmond was the better team, beating Wisconsin 62-52.

In the opening minutes of the game, the Spiders and Badgers exchanged early baskets, with each team getting going inside. After the first media timeout Richmond went on a nice run to give them a seven point lead with 11 minute to play in the first half.

Wisconsin was finally able to get some momentum back by going inside, as the Badgers struggled from the behind the arc all half long. Richmond however was unwilling to relent, as the Badgers went into the half trailing 29-31, after a 16 point half by Blake Francis of Richmond.

In the first half, Richmond shot 45% on 31 shots, while Wisconsin was only 20% from behind the three-point line on 15 shots. The shooting discrepancy ultimately was a major reason for the first half woes, but Wisconsin was able to trim the lead to two after Tyler Wahl buzzer-beater.

In the early moments of the second half, Grant Golden got hot early for Richmond to give the Spiders an early six point lead at the first media timeout. Wisconsin though were able to shave away at the lead due in large part to some nice play by Wahl and Nate Reuvers.

The Badgers were able to retake the lead from the Spiders at the 9:56 mark, but Richmond responded quickly to snatch the lead back after a run of their own.

Badgers now trail 53-50 in the waning moments of the game.

Lots of sloppiness in the Barclays Center.

In the end though, Richmond would hold of the Badgers late with some clutch shooting, and complete ineptitude from Wisconsin’s offense for the final nine minutes. The Spiders went on to win 62-52 for a resume building win of their own.

Blake Francis is good, and he’s my friend

Three things that stood out

Wisconsin struggled with shot selection throughout the game against Richmond. The Badgers were able to make their hay from inside, but stubbornly continued to shoot from deep at inopportune times, especially in the first half.

3:14 to go in the until the half, Badgers now down six with Wahl to the line.

In the second half, Greg Gard’s crew continued to go inside, but were never able to really get the outside shot going. Wisconsin’s efforts in the paint resulted in 14 free throw opportunities, and the Badgers cashed in with 11 makes, but that was the only positive on the offensive end. The major problem for the offense was the inability of Wisconsin to make their easy ones inside the paint in the second half, as the Badgers only shot 34% from the field on the game.

Richmond entered the contest averaging 92.5 points per game. The Spiders are generally good at pushing tempo. Wisconsin was able to take them out of their game in the first half, as the Badgers didn’t allow a transition basket, and held the Spiders to only 31 points.

The flow of the game was definitely in Wisconsin’s favor for most of the game, but Richmond was able to speed up the Badgers at times in the second half, resulting in 15 turnovers, a season high. Down the stretch Wisconsin faltered under the pressure, while Richmond flourished.

Richmond entered with four players scoring in double figures. With their two 20 point scorers, Nick Sherod and Jacob Gilyard, each not able to hit the mark, Richmond turned to Blake Francis and Grant Golden to shoulder the load. Francis and Golden did not disappoint, scoring 35 of the teams 62 points.

On the other side, Wisconsin struggled to score. Reuvers and King were the only two Badgers in double-figures, and neither player shot over 50% from the field. Wisconsin looked out of sorts at times, and did not have someone to turn to when they needed the big shot. The Badgers only scored five points in the final nine minutes plus of game action.

A stark difference in comparison to Richmond.

In the end Richmond had players to turn to in order to score, and Wisconsin couldn’t get it going anywhere outside of Reuvers and King to a certain extent.

Badgers only shot 34% from the field, gotta be better.

Up next: The Badgers will be back in action on Tuesday to take on the loser of the Auburn/New Mexico game on the other side of the tournament bracket.