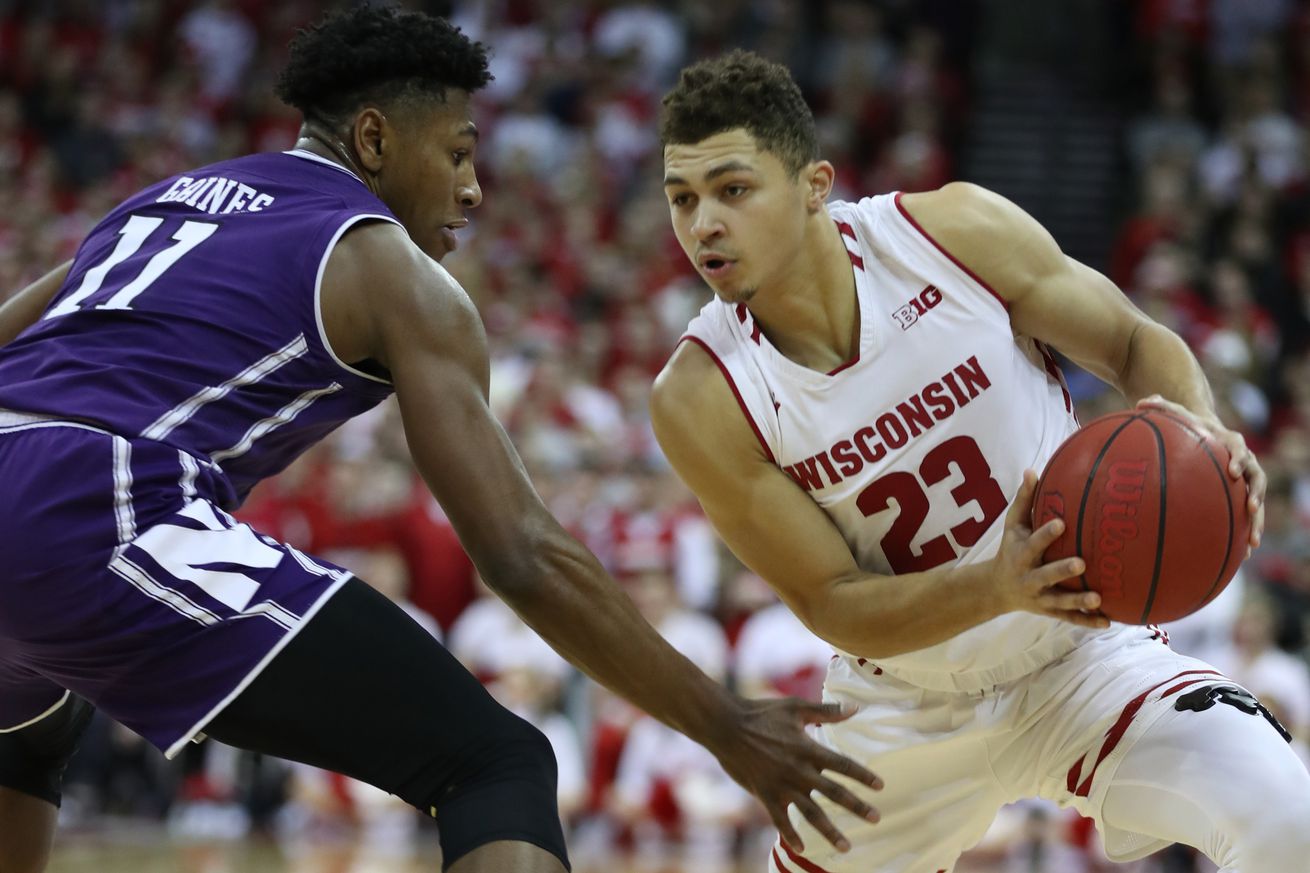 How has our staff liked Greg Gard’s recent recruiting? Where will the Badgers finish in the B1G?? Who will lead the team in charges taken???

Here is the first of a few roundtables we will have leading up to the start of the Wisconsin Badgers men’s basketball season. This first one is all Wisconsin focused.

What is your ideal starting lineup for the Badgers this season?

How will the offense function without Ethan Happ in the middle?

Ryan: I think it will be more open and free. The past few seasons with Happ as the focal point, it seemed like the offense slowed down a lot when it could have pushed the tempo more. I think once Potter is eligible, the offense will be much better with two big men that can play both inside and out. Granted I think the biggest thing Wisconsin will miss will be Happ getting double-teamed, allowing someone else to get open.

Belz: The swing offense will be back in action to a heightened degree this year. With Happ dominating the post touches the offense would get stagnant at times. The 2019 team will need to have better ball movement and take advantage of open driving lanes. Wisconsin will need players to step up when shooting droughts occur, something that Happ would do the majority of the time. Reuvers, Aleem Ford and Potter all being able to stretch the floor and hit from three will go a long way in aiding the offense’s transition from Happ-focused to a more spaced out version.

Tyler: Honestly, I think they will be a better “team” this year. I am not saying the W/L record will be better, but I do believe they will play better team basketball. Happ was a great player but the offense ran through him so much that I think some guys looked to be pass first vs. playing to their strengths. I believe they’ll miss Happ’s passing ability much more than his scoring. It will be interesting to see as we haven’t seen it in quite some time.

Neal: I think it is unrealistic to expect there will be a seamless transition to a Happ-less offense. Happ was such a consistent threat even when his shot was not falling, that him not being on the floor leaves a giant hole. Someone must emerge as the go-to for creating his own shot. Brad Davison and/or D’Mitrik Trice are the likely favorites as the primary ball handlers, but Kobe King could develop that role as well.

At all times the Badgers will have five capable outside shooters on the floor and developing the threat of attack off the dribble will open up more space for those shooters. I expect more ball movement and a steady rotation of different players shouldering the scoring load from game to game.

Kevin: On paper, this year’s team should have improved spacing and shoot the ball better from three, but Happ bailed out the Badgers time and time again late in possessions last season and I think his absence will be felt. I agree with Tyler that his passing will be desperately missed, and I’m not sure if Trice and Davison have the offensive playmaking ability to carry the offense.

Who is your breakout player this season?

Ryan: I have said this before and I will say it time and time again – Kobe King. He showed signs of improvement last season and looked like one of the few guys on the team that could consistently create his own opportunities by driving to the basket. He has the size and quickness to really be a problem for the opposition.

Belz: Micah Potter. When eligible, he will not only be a double-double candidate each game, but he will also bring a leadership presence. Potter was very vocal in the Red/White scrimmage, and his teammates have all raved about what he brings to the team.

Tyler: Kobe King is going to ball on fools this year. Mark it. I think he’ll be the go to guy this season.

Neal: I am taking this literally and going with Micah Potter breaking out of NCAA jail. For reasons unknown to anyone, Potter will not be eligible until after the first semester. He was the most impressive player in the Red/White Scrimmage and frankly is the biggest unknown entering the season. Potter will be another big body in the post while at the same time is a confident shooter from behind the arc. Potter will be a pleasant surprise this season and a key contributor once the Big Ten schedule gets into full swing.

Update to the Micah Potter story: An attorney representing Potter says UW is filing a request for reconsideration to the NCAA’s ruling that the #Badgers junior forward must sit out the first semester this season. This story will be updated. https://t.co/bwXq29xXdC

Kevin: I don’t like going chalk but Kobe King is the obvious answer. He is so fun to watch on the offensive end and I’m excited to see how he develops with an increased role this season.

Who will lead the team in scoring, rebounding, assists and people made mad on Twitter by taking charges?

Ryan: I think it will be close, but I think King will lead in scoring, D’Mitrik Trice will lead in assists, Nate Reuvers in rebounding and Brad Davison will take ALL the charges.

Belz: My answers depend on if the numbers are based on averages, or raw accumulation on the year. In my eyes, scoring will be Brad Davison, Trice will lead in assists and Micah Potter for rebounds. Can there be a different answer than Davison for charges? If total rebounds, then Reuvers will get the nod.

Tyler: King will lead in scoring, Trice in assists, Reuvers in rebounding but I think Potter will come along nicely to help that and Davison the charge king will make everyone upset online.

Neal: Scoring will be Davison, he seems likely to have the most consistent scoring output. Even after sitting out a few early season games Micah Potter will lead in rebounding. D’Mitrik Trice will have the most assists. Big Ten officials will never call another block/charge call in Davison’s favor again, so my deep sleeper in charges taken is Tyler Wahl.

Kevin: D’Mitrik Trice will lead the team in scoring with a great shooting year and also lead the team in assists. Reuvers will lead in rebounds and of course Brad Davison will take a million charges and trigger all of the haters.

How happy are you with the way recruiting is going for the 2020 and 2021 classes?

Ryan: To copy an answer from a recent football roundtable about Paul Chryst’s play calling on fourth down – bonerriffic (Editor’s note: nice). One of the biggest knocks on Greg Gard is that he cannot recruit and he is proving everyone wrong, as Wisconsin has the seventh best recruiting class for 2020 and I believe the best recruiting class for 2021. While I wish he would grab some recruits from outside of the midwest, you can’t fault him for staying local-ish with the results he is getting.

Belz: Great. Stellar. Swell. Greg Gard has silenced some of his doubters. The 2015 and 2018 recruiting classes have really hamstrung the team the past couple of seasons. Brevin Pritzl and Khalil Iverson were the only players to really pan out from the 2015 group. Joe Hedstrom is the only remaining member of the 2018 class. The 2020 and 2021 classes are large, like those groups were. If the Badgers want to get back to being title contenders, the bulk of each class will need to pan out. On paper, both upcoming classes are phenomenal. I expect the 2021 class to grow in the coming months as well.

Tyler: I think it’s gone really well. For someone who can’t recruit Greg Gard seems to be .. landing recruits? It’s an anomaly right?

Neal: Recruiting is a fickle beast. It seemed downtrodden after recent, highly rated in-state players went elsewhere but credit Greg Gard and staff for putting together two well balanced classes. Lorne Bowman and Chucky Hepburn at point guard for both 2020 and 2021 is huge, you can never have too many ball handlers. The Davis twins will bring a ton of athleticism along the perimeter, and Chris Hodges will provide the same in the post. Additionally Ben Carlson, Steven Crowl and Matthew Mors are rangey players comfortable scoring from deep.

In short, the caliber of players that have made Wisconsin basketball successful under Bo Ryan/Greg Gard.

Kevin: It has been a great couple of months on the recruiting trail, as Gard has secured four commitments in the 2020 and 2021 classes since August. After missing out on the Hauser brothers and Jalen Johnson (although it was a long shot), the Badgers desperately needed to add some talent for the future. Gard delivered with commitments from some big time prospects such as Ben Carlson, the Davis brothers and Matthews Mors among others. It looks like Gard really has the program moving in the right direction on the recruiting front as we head into the 2019-20 season.

Where will Wisconsin finish in the Big Ten? Please save other B1G predictions for the next roundtable.

Ryan: I am going to go with the hot take and say that the Ethan Happ-less Wisconsin Badgers, will be anything but hapless, and will secure a two-round bye for the conference tournament and finish fourth place in the conference.

Belz: I think fourth or fifth is about right. The B1G will be tough this season, especially at the top.

Tyler: I’ll say fifth for now but I think it will be a really tight race with a few teams around them.

Neal: Always finishing in the top four of the Big Ten gets another streak going. Badgers finish third.

Kevin: The conference is wide open after Michigan State and Maryland, but I like the Badgers to finish fifth this season.