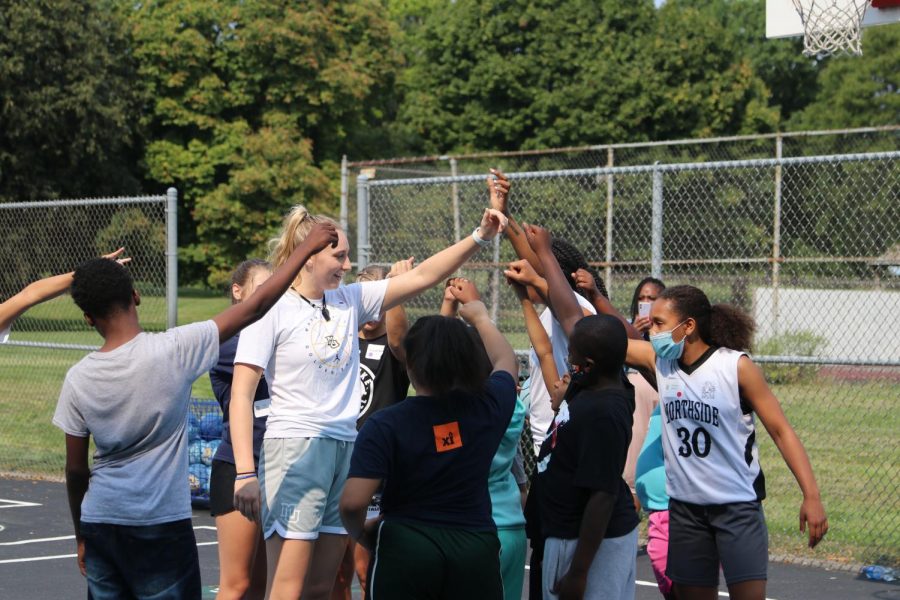 There are 56 days that separate today and Marquette women’s basketball’s season opener against Alcorn State.

However, the Golden Eagles got an early start to their season on Saturday.

Marquette teamed up with the University of Wisconsin-Milwaukee women’s basketball team and the Milwaukee Police Department to host a free basketball clinic at Milwaukee’s North Side Washington Park. The clinic was open to grades one through eight.

“One of the commitments we made last year in a very difficult year is to try as many times as we can to get out into our community,” Marquette head coach Megan Duffy said. “We play Milwaukee every year on the women’s basketball side and I said, ‘let’s take our differences, come together to give back to our youth and teach the game we love.’”

Duffy said that she’s wanted to hold a basketball clinic after conversations with UWM’s basketball program along with hers.

“We talked about what change we can make and (how can we) try to create a community in a city that was about unity,” Duffy said. “This is about coming together from all different backgrounds to play the game of basketball and to really just help support each other. To have the police department in full support of our youth and our kids in the community is absolutely tremendous.”

UWM women’s basketball head coach Kyle Rechlicz said he was eager to team up with Marquette for the initiative, and said he only sees them as rivals when they are opponents on the court.

“There’s really only one day a year that I’m not cheering for her and that’s when we play against them. Other than that our programs support each other a ton,” Rechlicz said. “To be able to collaborate and bring our two programs together for an event like this, where it just shows that you can unify and bring the city together, I think it’s so important on so many levels.”

Rechlicz said that along with social media, both teams used their connections through the local youth leagues and youth programs.

“This is year one and you see a great turnout,” Rechlicz said. “If we can continue to do this year after year, how big could this event get?”

Many in the sports world recognize that athletes have a special platform where they are seen as leaders in a community.

For graduate student forward Lauren Van Kleunen, an event like this is why she took advantage of the extra year of eligibility given by the NCAA due to COVID-19.

“This is the best part of the job,” Van Kleunen said. “You get to be a part of the community and see all this stuff that goes outside of not just on the court that you are working towards, but how you’re impacting kids.”

For Marquette graduate student guard Karissa McLaughlin, Saturday served as her first encounter with the Milwaukee community after transferring to MU from Purdue.

“It’s super inspiring to get a whole bunch of groups of kids from different backgrounds all across Milwaukee,” McLaughlin said. “To bring us all together with UWM, it’s a super cool opportunity just to bring us all united.”

The day meant something special to redshirt junior forward Chloe Marotta, a native of nearby Mequon, WI.

“Giving back to the community is a huge part of what we do,” Marotta said. “We can always go up and be in Mequon itself but it’s something about being in Milwaukee where we play every single day and with UWM, that makes it very special.”

For three and half hours, the roles of coach and player were turned on their heads as the players put the whistle around their neck while coaching up the young kids.

“Sometimes our team doesn’t always realize the impact they make on young people and the opportunity to give a high five or smile is really everything,” Duffy said. “To be able to give back to the young girls and boys in our community and teach them a thing or two is pretty special.”

“I’ve been in their shoes before,” Van Kleunen said. “Doing clinics like this, looking up to college women, going to certain different camps. Playing basketball my whole life, I did the same thing. So the fact that I’ve been able to see it, come through it and then now be able to translate it, it’s an awesome experience.”

Saturday’s event was an opportunity for a lot of the Golden Eagles to impact young basketball players just as they were impacted by coaches during their childhoods.

For McLaughlin, this impact came from was her dad.

“(He) was my guy growing up, my coach who taught me everything I knew up until middle school and high school where I had trainers,” McLaughlin said. “My dad was always the person that I looked up to, one I inspired to be and just to be that happy person in the community that just loves to get back.”

Meanwhile for Van Kleunen, it was her grade school coach.

“He was extremely helpful in the fundamentals and he didn’t care how talented you were, he just wanted you to work,” Van Kleunen said. “He really set the foundation for me and that’s kind of where I started falling in love with the game of basketball.”

Some of the drills for the day included ball handling, passing drills, defensive shuffles and shooting competitions.

As Van Kleunen led the passing drill, she said there was a simple goal she wanted to demonstrate while coaching.

“That the little things matter,” Van Kleunen said. “That’s big with us, especially with Marquette women’s basketball. You’re never too young or too old to work on simple passing drills. Being able to do that, it’s really important to be able to show these kids that.”

Marotta said she hoped she was able to impact the kids in a lot of ways once they left her agility station.

“Whether that’s coming to a Marquette or Milwaukee game or just having fun,” Van Kleunen said. “Sometimes in this sport, that (fun) gets lost a little so having fun bringing the community together is extremely important. I’m really glad to be able to have a chance to do this. At the end of the day, bringing us all together is what’s important.”

And while the day was for the kids, Marotta said it was just as much for the players.

“We get to work together in different stations and get to meet some young girls that I haven’t talked to a lot,” Marotta said. “Freshmen last year didn’t have this experience, so it’s really important for them.”

Next up for the Golden Eagles’ season kickoff schedule is Marquette Madness, which is scheduled for Oct. 1 at 7 p.m. in the Al McGuire Center.

All in all, Duffy said she is excited to have the season just around the corner.

“This is a preseason time for both teams where we’re working really hard (on) strength conditioning and getting in the gym, but to be able to come out and do events like this before (it) really gets going in the heart of the season is great,” Duffy said. “The next couple months, you’re gonna see us out a lot just giving back and trying to get a great buzz around both basketball programs.”

This article was written by John Leuzzi. He can be reached at john.leuzzi@marquette.edu or on Twitter @JohnLeuzziMU.