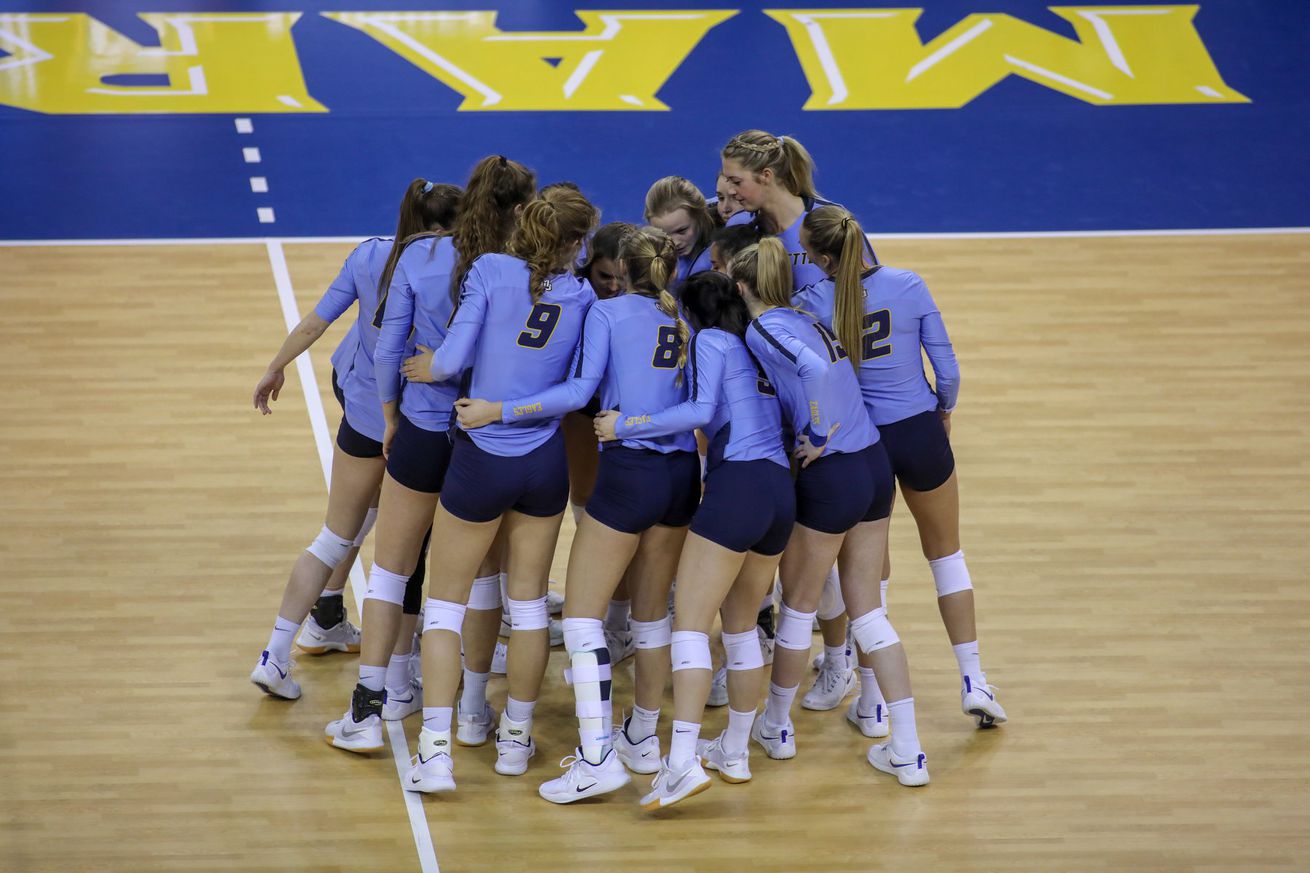 That’s what happens when you get swept the team that wins the regular season title.

Marquette volleyball went into Omaha on Friday night ranked #9 in the country and looking at a chance to win the Big East regular season title for the first time since 2013. All they had to do was beat Creighton in their own building after the Jays had beaten Marquette in five sets in Milwaukee back in October.

While the Golden Eagles took the first set off the Bluejays, 25-22, the rest of the match did not go nearly as well. Marquette hit .159 in the opening frame and then never matched that mark again, losing 17-25, 19-25, and 17-25 while falling 3-1 to Creighton. The Bluejays take the regular season title as a result, clinching at least a share with that win and locking up the outright title with their win over DePaul on Sunday. Marquette falls to 15-2 at the time, and after their sweep of Providence (25-9, 28-26, 25-17) to close the regular season, MU finishes at 16-2. That gives them the #2 seed in the Big East tournament, which will start on Friday.

The long and short of it is that whatever was working for Marquette in the first set against Creighton just stopped working from there on out. Neither team hit the ball well in the opener, combining to commit 14 errors. However, while Marquette’s problems with errors continued to plague them all match long, the same could not be said for Creighton. The Bluejays hit .444, .233, and .333 in the next three sets, overpowering the Golden Eagles at pretty much every turn.

Even the set scores don’t quite tell the full story. Marquette staved off set point twice in the second, scored two points late in the third when Creighton was up 23-17, and were trailing 23-14 in the fourth before the Golden Eagles got three late ones there. After a hard fought and incredibly competitive opening frame, the Golden Eagles ended up just playing out the stretch in the next three sets when things got down to it. They were never in the three last sets, not really, not when it mattered.

There’s not really much to talk about from the Providence match, as evidenced by Marquette swatting the Friars 25-9 in the first set. Yeah, it took extra points to beat them in the second set, and yeah, Marquette had to fend off set point twice there. Hope Werch and Ellie Koontz were the heroes of the moment there, and back-to-back smacks from Allie Barber gave MU the 2-0 lead. The story of the third set is just Marquette putting together two and three points at a time and boom, all of a sudden they were up 21-15 late. Freshman Claire Nuessmeier got to bring it home with the match winning kill.

Up Next: As mentioned, the regular season is wrapped up which means it’s conference tournament time. Marquette is hosting the four team event at the McGuire Center, which starts on Friday, the day after Thanksgiving. The bracket is set, with #2 Marquette facing #3 Villanova with a 2:30pm Central first serve, and #1 Creighton and #4 St. John’s will get started at 5:30pm. Both matches will be streamed on the Big East Digital Network, while Saturday’s championship game will air live on FS2 at 3:30pm Central.