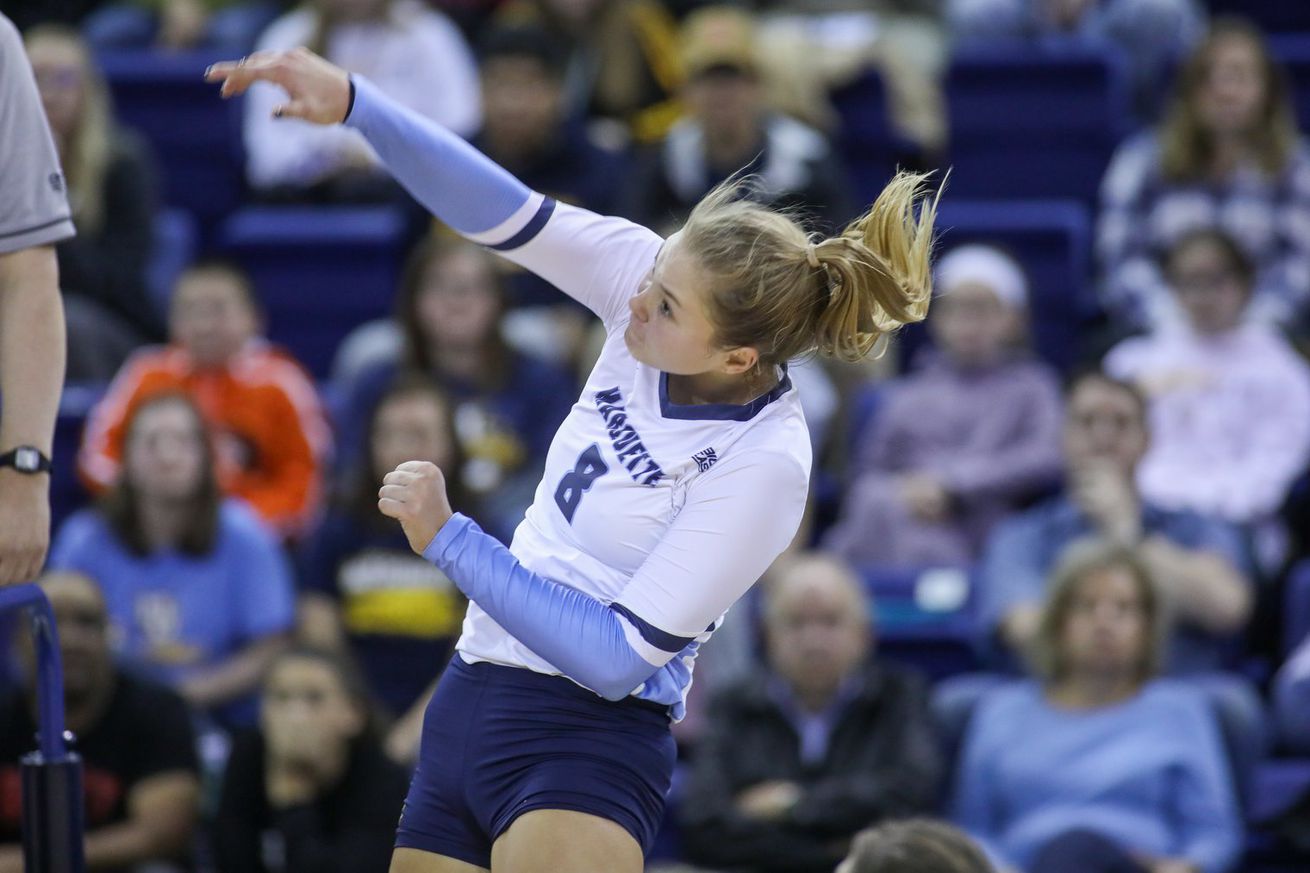 Hope Werch was her usual all-around reliable self for Marquette over the weekend. | Facebook.com/MarquetteVolleyball

and also beat Providence, so that’s something

In the second biggest weekend of the conference schedule, your #10 Marquette volleyball team….. went 1-1. The Golden Eagles knocked out Providence 3-0 in just 79 minutes on Friday evening to remain unbeaten in Big East play heading into Saturday’s showdown with fellow unbeaten #13 Creighton. That one did not go in MU’s favor as they rallied back from an 0-2 hole to force a fifth set but ended up with the 3-2 loss.

Marquette is now 5-1 in Big East play and alone in second place, while Creighton takes the top spot in the league at 6-0. Not an unexpected result, of course, given that Creighton has now won 13 of the last 14 matches against the Golden Eagles and each of the last six meetings. Still, the one thing that has eluded Marquette in their run of NCAA tournament appearances has been a regular season title, and the path to that goal just got an awful lot harder.

That’s a discussion for a future time, though, so let’s dive into some recapping action.

It looked like Marquette was ready to mow through Providence on Friday night as they dispatched the Friars 25-14 in the first set after jumping out to a 9-3 lead. That was a little misleading, though, as the Golden Eagles hit an absolutely ridiculous .440 as a team in the opener against .094 by Providence. Things toned way down on Marquette’s end over the next two sets and the Friars made things interesting.

In the second set, it was tied up at 10 each when Lindsey Schaible and Jennifer Leitman stuffed MU’s Hope Werch on an attack. Marquette responded with kills on the next five points to take a 15-10 lead to create some space, and a little bit later, a kill by Hannah Vanden Berg and two PC errors made it 21-13. It eventually turned into 24-16 after a kill by Madeline Mosher, but the Friars knocked together four straight points while fending off set point to make it 24-20. Dangerous? Maybe not, but enough for head coach Ryan Theis to call timeout and settle things down after Marquette had been blocked on two straight points. Mosher came through for the kill for point #25, and we moved on to the third set.

A 6-1 start and a 13-5 lead by Marquette in the third probably ended things earlier than you’d think. If it didn’t, Elizabeth Orf putting Marquette up 18-8 did. However, as Theis adjusted his lineup to get his bench some playing time, the Friars climbed back into things a bit. It wasn’t out of control and it wasn’t ugly, but Allison “Not Allie” Barber pulled Providence within six at 24-18 before Vanden Berg wrapped things up.

Five different Golden Eagles tallied at least four kills, led by Allie Barber with 11 on just 16 error free swings in the entire match. With Barber taking it easy in this one, it was Vanden Berg carrying the offense with a team high 26 attacks. Sarah Rose (12 assists) and Claire Mosher (16 assists) split setting duties here as Lauren Speckman sat out in street clothes, as did KJ Lines. Martha Konovodoff was her usual self, pulling together 17 digs in just three sets.

Things looked really bad early on for Marquette against Creighton on Saturday night. The opening set had a score of 25-21, but it was Bluejay errors of one stripe or another that kept the Golden Eagles alive. The Jays hit .256 against .053 for Marquette in the first set, and even with that off-balance numbering, Marquette was on a run and closing on Creighton at 20-18 and 23-21 late before back-to-back kills from Erica Kostelac wrapped it up.

Those two brought Kostelac to four kills on the night, but she wasn’t the big story for Creighton. That goes to Keeley Davis, who started the opening set with four kills as well, and would go on to torment the Golden Eagles for 31 strikes while hitting .390.

As rough as the first set looked for Marquette, things settled in for the Golden Eagles in the second set. Each side only scored more than two points in a row once in the entire set, but it was Marquette holding the short end of the stick when Kostelac closed it out at 25-23. It wasn’t the first time this season that Marquette was staring down the barrel of a sweep against a top 25 team, as the same thing happened to them on the road against Wisconsin earlier this year.

Much like that Wisconsin match, Marquette responded by taking the next two sets. Both required extra points, sending the McGuire Center into a frenzy. Of course, if it went to extra points, it wasn’t easy getting there. In the third, Marquette got out to an early lead on the Jays, and for a long stretch, they were holding them off, sitting on a 17-12 lead. It kept getting closer and closer, though, and finally Davis knotted it up at 22 with a kill….. and then a handling error by Sarah Rose and a kill by Davis made it 24-22. Match point for the Jays, believe it or not, sports fans. Kostelac committed a service error, and then insanity broke out.

Keeley Davis had an attack go out of bounds, officially an attack error. CU head coach Kirsten Berthal Booth, half-laughing in the process, immediately challenged the call, claiming that there was a touch by Marquette before it went out. The replay took almost no time at all, the ref discussed the call with the scorer’s table, telling them the call was confirmed……….. and then she signaled Point Creighton. Justifiable hysterics from the CU bench… but they had to be informed that the signal was wrong. Call confirmed, Point Marquette. 24-all.

The Jays took it to match point twice, but Marquette answered each time before putting Creighton on the business end of set point. Davis was able to fend it off once, but she committed a service error on the next point, and an error by Kostelac sent it to set #4.

I can’t even properly discuss what happened in the fourth set, as it was one of the better sets of volleyball that you’ll ever see. Tight and close, back and forth, everything you could possibly want from a top 15 match. Creighton carved out a 22-18 lead on the back of five straight points, and things were looking bad for Marquette. With things hanging in the balance, Marquette took advantage of a service error by Makenna Krause and another attack error by Davis to knot it at 23. Marquette would fend off match point three more times, followed by Creighton fending off set point twice before a kill by Hope Werch sent it to a fifth and decisive set.

And then First Set Marquette came out to play again. As great as everything looked for the past three sets, everything looked sideways and out of control for the Golden Eagles in the fifth. Creighton got out to a 6-2 lead, and when you’re only playing to 15 for reasons that no one has ever been able to properly explain to me, that’s a big lead. A service error by CU’s Megan Ballenger was MU’s only respite as the Jays went up 9-3. That was pretty much all she wrote, and an error by Allie Barber brought the night to a close.

Ending error aside, Barber was otherwise great, putting up a team high 23 kills and hitting .352. She was joined in double digit territory by Madeline Mosher (11), Werch (11), and Hannah Vanden Berg (10). Claire Mosher got the start at setter, but eventually gave way to Lauren Speckman in the rotation. Mosher had six assists, and Sarah Rose had 19, but it was Speckman with the team lead with 30. Four Golden Eagles had at least 10 digs, led by Konovodoff with 24. Speckman, Rose, and Werch all posted double-doubles thanks to their digs.

Up Next: Remember at the top when I said this was the second biggest weekend of the conference slate? The biggest one is yet to come, as Marquette has to refocus and maintain their path to November 22nd’s showdown in Omaha with Creighton. That starts this coming Friday as the Golden Eagles head out to Villanova (12-5, 3-2 Big East) to open a stretch of four straight road matches. They’ll be in Washington the following night to tangle with Georgetown (11-8, 1-4 Big East) as part of the road trip.