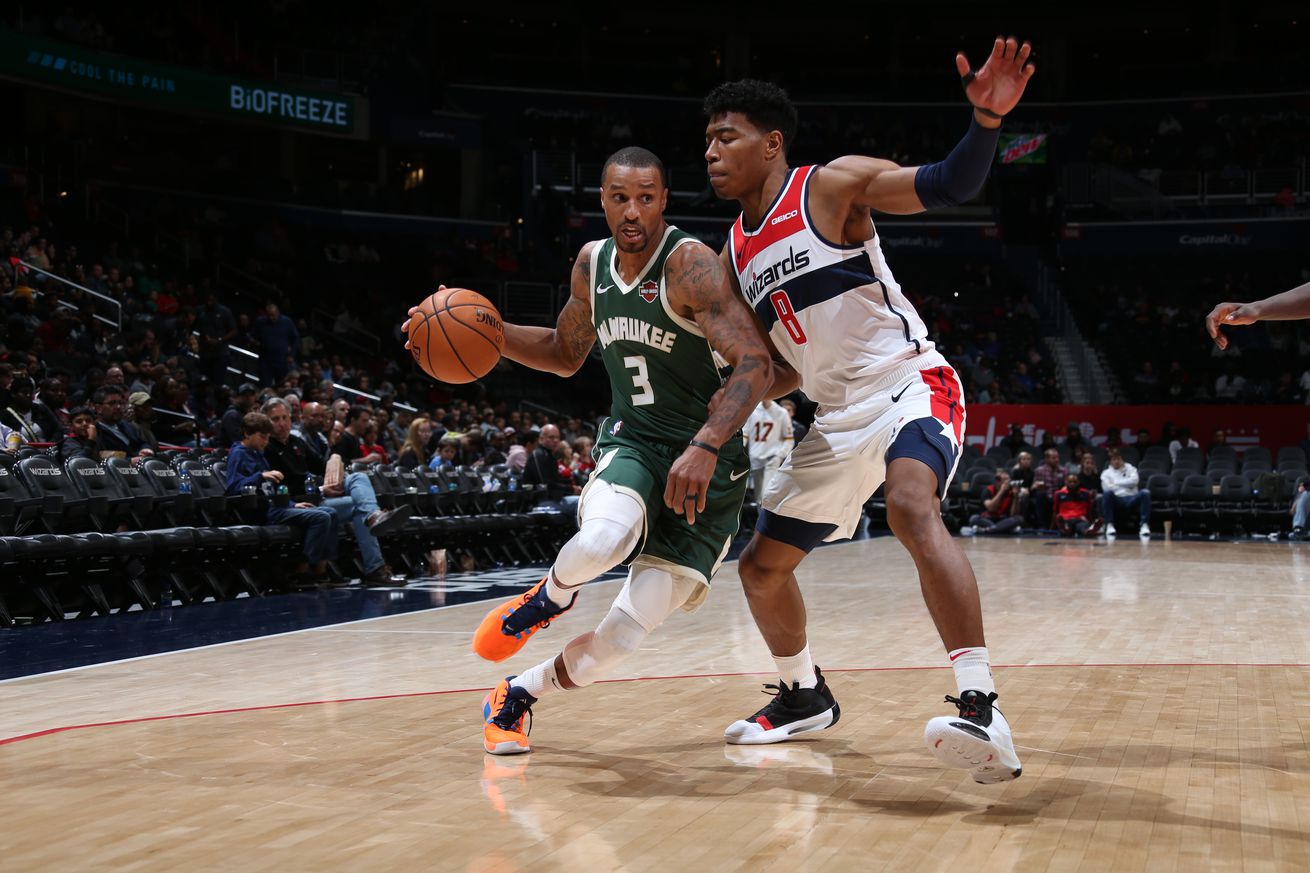 Nobody beats the Wiz huh…

In their second to last tune-up for the regular season, the Milwaukee Bucks weathered a DNP-Illness night for their star and took down the young Washington Wizards, 115-108. Milwaukee cracked open an early lead in the first behind some hot-shooting, but the Wizards battled back with triples to make it just a 27-26 game with the Bucks ahead. The Bucks offense went frigid to start the second as Washington opened up their advantage, but a potent final six minutes led to Milwaukee still winning 55-52 at halftime. Despite Milwaukee opening up a sizable lead at one point, the Wizards came back to create just a one-point game, 84-83 after the third. The Bucks closed it out with some triples and dunks down the stretch.

With Giannis Antetokounmpo out, Middleton took center stage in the Nation’s capital and savored every second of it. Bucketing 11 of the Bucks’ first 17 points, he was entirely comfortable working at his speed to find his spots within the arc to land swishes aplenty. He started the third with a triple too. He’s had a history, sans last season’s white-hot 3-point starting streak, of beginning slow, so it’s always refreshing to see October shots fall for Middleton, especially when he’s the focal point for the opposing defense. He finished with 22 points on 9-14 shooting.

The Big Ragu Made Some Sunday Gravy, but His Shot turned Sour

Donte DiVincenzo continues to show flashes of competency as a ball handler/creator filling in with the Bucks’ bench units. Yes, it’s often against backups, but that’s ideally who Bud would task him with beating in the regular season. In the second quarter in particular, he was looking for and creating his own shot occasionally, along with setting up his teammates along the arc and in particular while they rolled to the basket.

The most impressive example yet of Donte’s passing potential in the preseason probably came on a drive to the bucket when he threaded a wraparound pass around two Wizards to Ersan Ilyasova en route to a finish during that sound second period. His second half wasn’t gravy. He struggled some finishing at the rim, forced a few shots and he finished just 6-17 from the field including 1-7 from three.

Atop the key, he pump-faked and drew eyes from plenty of Wizards defenders, slinked inside the arc with a few dribbles and bopped the ball over to an awaiting, uncovered Sterling Brown for the triple. In the third, he even managed to take a Wizard off the dribble with a rim finish that warranted an emphatic celebration from the Bucks’ bench. If he can add a few plays like that beyond being a roving/stand-still shooter, it’s added grease to Bud’s offensive system’s wheels.

Korver straight to the hoop…

The bench loves it #FearTheDeer pic.twitter.com/Z2gUjgtAu7

Rui Hachimura impressed early, even against the veteran savvy of Ersan Ilyasova. He was able to shrug off Ersan falling to the floor in pursuit of a charge, but the more impressive part was a few possessions later when he side-stepped around Ilyasova in transition, anticipating the Bucks’ signature move. He was pretty frenetic, in a fun way, even trying a statue of liberty style slam at one point.

How about Thanasis with the impressive block-wedgie? Give the man that basketball for his mantle!

A proper “teaching moment” came for Dragan Bender in the first quarter, when Donte DiVincenzo tried to get him to quickly switch back from Bradley Beal onto Thomas Bryant defensively around the arc, but the big man didn’t react quickly enough. Thankfully, Beal pounded the air out of the ball and missed a pull-up rather than speeding past Bender.

Am I the only one who just learned in this game that Davis Bertans, noted sharpshooter, is actually missing part of his finger from a woodcutting incident?

Drew Gooden referenced how Ersan Ilyasova would often get joked about in the locker room because his game seemed so mature for his age, even at 25 or 26, as did his personal life with several kids. Nothing quite like a direct reference of the Ersan improper age conspiracy on national television. I had no idea Gooden was the Wizards color commentator, but a few other topics touched on:

I thought DiVincenzo showed more capability finishing at the rim last season than I thought he had coming out, but he certainly struggled against the Wizards length in the restricted area in this one.

In one of the few close games the Bucks have had to start the fourth, Bud opted to go with mostly his starters, substituting Donte for Ersan, to begin that period for the first time in the preseason.

Thanasis Antetokounmpo not only garnered several travel calls, but also an offensive foul for grabbing an opponent’s arm as he tried to drive by him. If the refs are cool just calling those charges on Thanasis all season rather than Giannis to fill their Antetokounmpo quota, it may be worth it for Bud to insert him for 1-3 minutes per game.