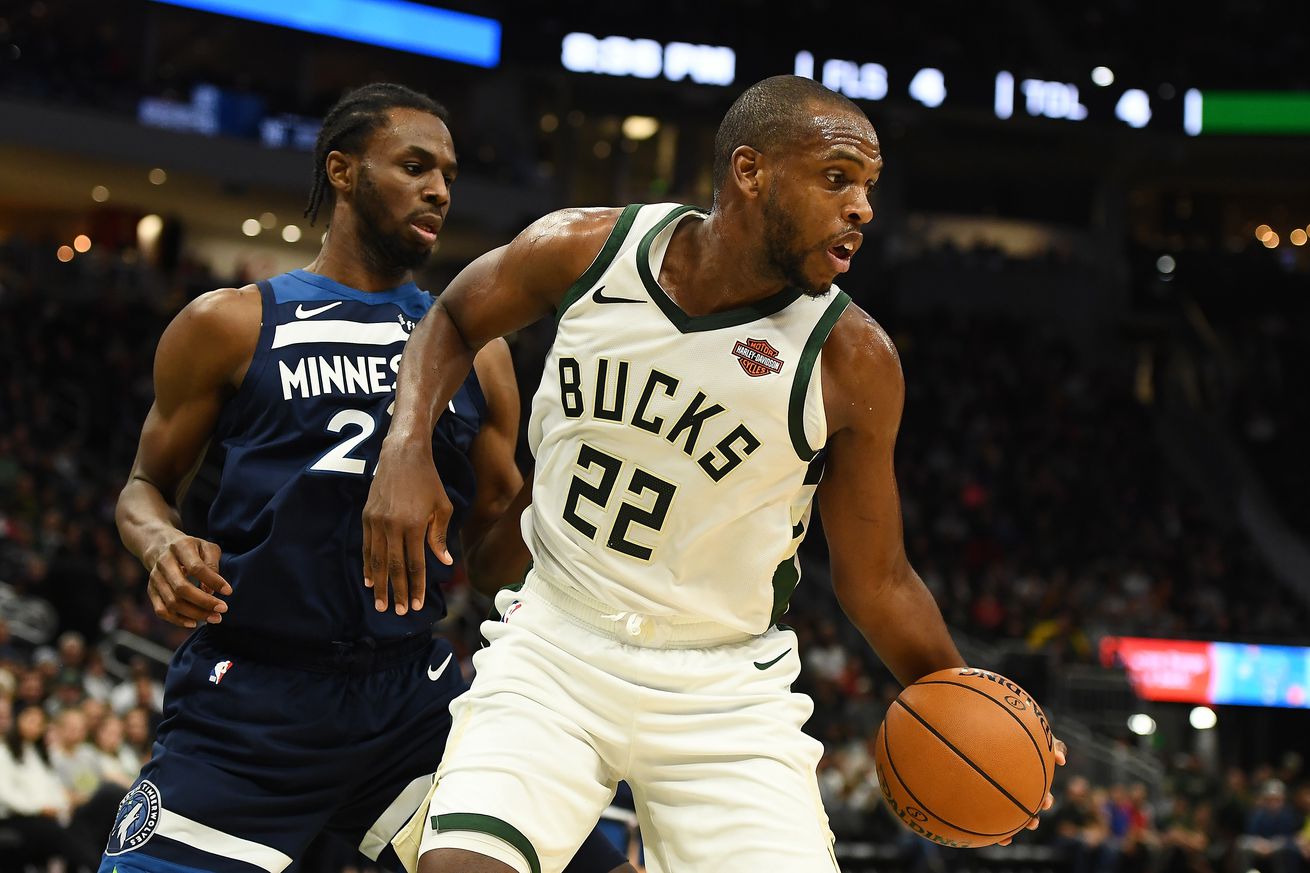 The Bucks polish off the Timberwolves handily

If a 118-96 victory where the Milwaukee Bucks didn’t look to break much of a sweat against the Minnesota Timberwolves wasn’t a sign it’s time to start the regular season, I’m not sure what is. If you missed the opening stanza of this one, your eyes are likely healthier for it, as a rockfest between both teams ended with the Bucks barely ahead, 23-22. Milwaukee’s shot finally found its way back from wayward, sending the Bucks to a 56-42 halftime lead. The third quarter was much of the same, with an 89-73 advantage heading into the final period. It was Scrub City for the most part from then on, with mop-up duty

Besides the absence of Eric Bledsoe, it seems like Bud used a good chunk of this game to give us a glimpse at what the regular season rotation could look like. He trotted out the guys we expected to begin – Hill-Matthews-Middleton-Giannis-Brook – and relied on Middleton as the last lingering starter of the crew for playmaking duties. He did lean on an entire bench unit at points, with Donte, Connaughton, Korver Ilyasova and Robin sharing the court together. The defensive bona fides of that group leaves plenty to be desired, but they showed some passing pop together, particularly leaning on Robin’s size advantage inside over the Wolves. Just one more week until we see the official unveiling of Bud’s rotation. It should also be noted we didn’t see Thanasis Antetokounmpo at all in this one.

For the first time this preseason, Robin Lopez really had his Mr. Clean moment to shine, ending with 14 points, six boards and an impressive +26 on the evening. He was the offensive anchor of those bench units I mentioned above, able to just bully his way into the paint. He does an excellent job of calling for the ball high, and keeping it there when the pass is delivered properly before swiftly moving into his post shot. He also showcased his size at the rim defensively. Plus, he got a technical. It felt like the first true RoLo experience of the year.

This preseason, it’s been all about the hot-shooting from deep for Milwaukee. They shot 36.7% on nearly 40 attempts per game overall, but flattened to only 27.5% on 11-40 against the Wolves. All last season, the reason this team showed such promise was that it wasn’t a one-trick pony offensively. When the threes weren’t raining down, they barreled straight to the source and struck gold at the tin. We saw that last night, with a 54-24 pummeling in paint points that illustrated why, even when this team’s shot isn’t falling, it’s tough to outlast them.

Something about this just makes me smile:

Jeff Teague and Coach Bud exchange handshakes and pleasantries during Wiggins’ free throw. Bud rubbed his beard and laughed so there must have been some solid facial hair chatter.

Picture perfect pass by Lopez in the first when he was lurking above the left elbow before Khris Middleton cut between two Timberwolves into the paint and Lopez threw a lumbering wraparound bounce pass to Middleton for a finish. The effort it seemed to take Lopez to bend down and slide it in was worth the highlight.

With the presumed starting five out tonight, the first substitutions were Connaughton (for Matthews), Ersan (for Giannis) and Connaughton (for Hill) just after the six minute mark. Robin Lopez entered soon after, leaving Middleton as the lone starter.

The Bucks started 0-12 from 3-point land before Pat Connaughton finally knocked down a spot-up triple late in the first.

We saw some vintage Lopez inside the arc action in the first half of this one, with him slowly pivoting his way to an elbow jumper and later taking his defender down on the block for an old-school hook finish. The Timberwolves went mega-small in the second, and Lopez wasn’t afraid to go straight to the block with a clear size mismatch.

And the award for sloppiest attempt at a sizzle reel play goes to…George Hill going with a between the legs backwards pass to Sterling Brown, who didn’t seem to be expecting it, and Hill promptly plowed over a Timberwolves player to draw an offensive foul. Next time…

D.J. Wilson made his first appearance of the preseason in this one. In 10 minutes, he went for four points, one rebound and one assist.

Pat Connaughton had two tricky cross-court reads in semi-transition during the third quarter. Trotting the ball up either wing, he waited for Donte DiVincenzo to finish his run straight up the floor through the paint and clear out before flipping it over to an awaiting Buck along the arc for a triple. Korver connected on his. For a lineup of backups bereft of playmaking, Connaughton showing some snap decision skills rather than forcing the unit to try out a halfcourt set showed savvy.

DiVincenzo’s 3-point shot continued to fall flat in the preseason, as he ended just 5/22 (22.7%) from beyond the arc in five games.