The Bucks closed out the Suns on Tuesday night, winning the 2021 NBA Finals by a 4-2 margin and earning the franchise’s first championship in 50 years. Milwaukee last won a title in 1971, led by Kareem Abdul-Jabbar, and hadn’t earned a spot in the Finals since 1974 before this year. 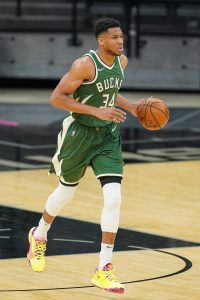 Two-time Most Valuable Player Giannis Antetokounmpo led the way for the Bucks, improbably earning NBA Finals MVP honors in a unanimous vote just three weeks after suffering what initially looked like it might be a season-ending knee injury.

Antetokounmpo’s knee hyperextension caused him to miss the last two games of the Eastern Conference Finals against Atlanta, but Milwaukee advanced to the Finals without him and he was able to get back on the court for Game 1 vs. Phoenix. The 26-year-old subsequently showed no ill effects from the injury, averaging an incredible 35.2 points, 13.2 rebounds, and 5.0 assists per game on 61.8% shooting in the six-game series.

Antetokounmpo’s performance on Tuesday was especially remarkable, as he became the first player in postseason history to register at least 50 points, 10 rebounds, and five blocks in a single game, per Justin Kubatko (Twitter link). Giannis’ 50 points tied the record for most points in an NBA Finals closeout game, according to ESPN Stats and Info (Twitter link).

Antetokounmpo becomes the third player in NBA history to win an MVP award, a Finals MVP award, and a Defensive Player of the Year award over the course of his career, joining Michael Jordan and Hakeem Olajuwon.

The Bucks’ championship victory is especially meaningful not just for Antetokounmpo but also for head coach Mike Budenholzer, whose job would have been in jeopardy if Milwaukee had been eliminated earlier in the playoffs, and for general manager Jon Horst, who took a big swing by giving up several first-round picks and swaps for Jrue Holiday during the 2020 offseason.

Although Holiday’s offensive production was up and down during the series, his defense on Suns guards Chris Paul and Devin Booker was a crucial part of the Bucks’ success and ensured that Horst’s gamble paid off.

While the Bucks will have some roster issues to address in free agency, especially if Bobby Portis and Bryn Forbes opt out, the team has its entire starting lineup under contract for next season, with Antetokounmpo, Holiday, and Khris Middleton all locked up for multiple years. The Suns will be in a similar position if Paul returns to Phoenix.