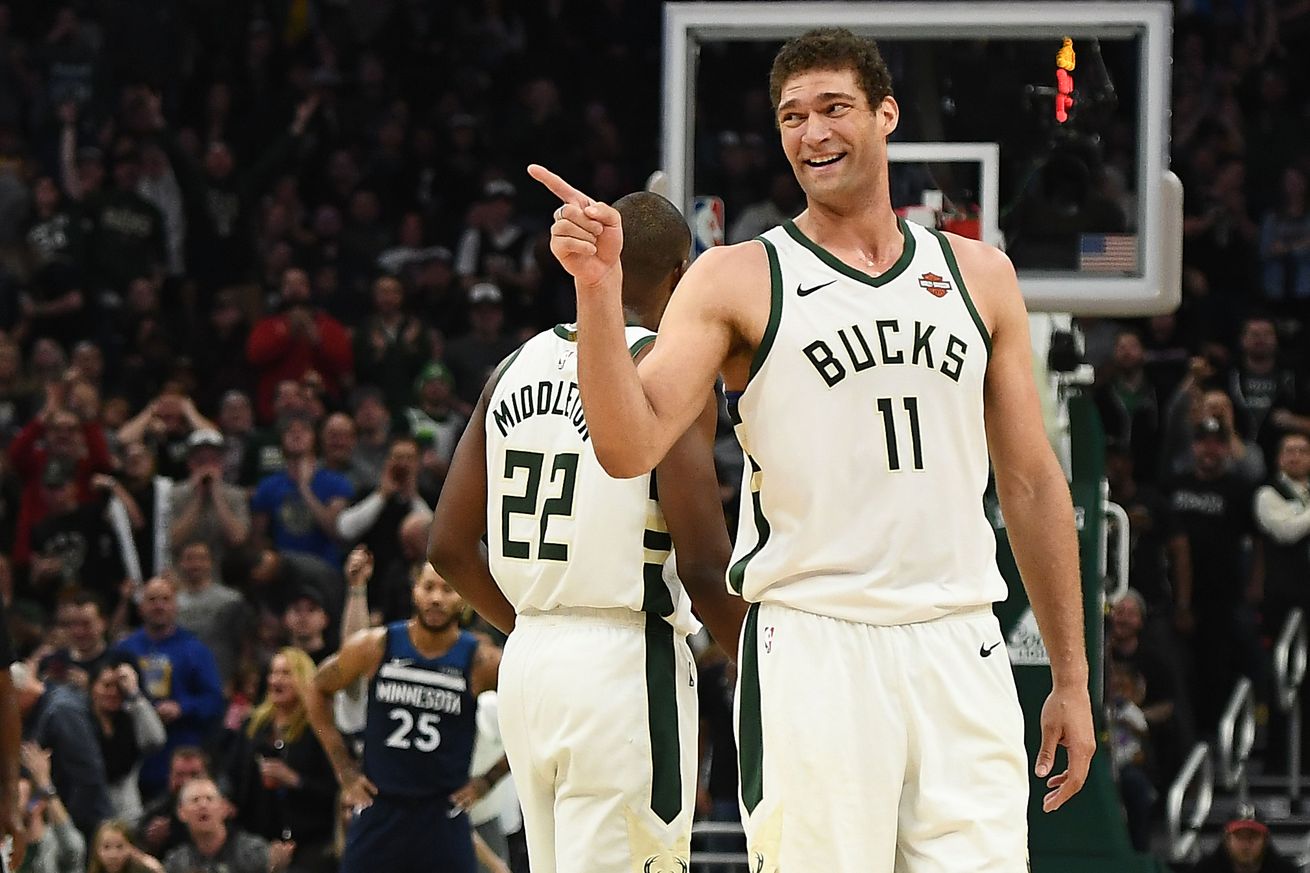 A spotless exhibition record is on the line

Brook Lopez’s smile is a pretty fitting encapsulation of how Milwaukee Bucks fans must feel with just one game left in the preseason against the Minnesota Timberwolves. After starting everything off with a backup squad bullying the Chicago Bulls, they’ve run roughshod over the Jazz, Mavericks and Wizards in order. By my estimation, the young Wiz might’ve actually given them the best run for their money, but the Bucks have won comfortably throughout. They’ll aim to head into the regular season undefeated with one last win over Minnesota.

The Wizards game featured a late scratch for Giannis Antetokounmpo with an illness, giving Khris Middleton a chance to drop buckets early and often. He finished with 22 points for the night on a tidy 9-14 shooting clip, while Sterling Brown added a slow burn 18 in his own quality bench effort. Donte DiVincenzo’s shot has run hot and cold this preseason, trending towards the latter against the Wiz, but look for him to get one last shot at a heavy amount of burn as a primary ball handler in this one. It’s the last tune-up game and chance for Bud to experiment with wonky lineups or putting players in outsized positions they’ll only be required to do spot duty for in the regular season. This could be a fun one. Also of note, the team won’t have Jaylen Adams or Luke Maye around after the Bucks requested waivers on both.

Brown’s been steady this preseason, not spectacular. Following a decent, but again, not splashy, Summer League stint, it’s never felt like Brown has quite catapulted himself ahead of the pack the way some may have thought after how he closed the season last year. I can see a scenario where he worms his way to the head of the leviathan that is the shooting guard rotation, but he could just as easily get buried. Look for him to compound quality performances after dealing with a minor injury earlier in the preseason.

Minnesota retained the Saunders legacy at coach, carrying over Flip’s son Ryan as their leader, and are hoping to build around what should’ve been their offensive fulcrum all along, Karl Anthony-Towns. With Jimmy Butler long gone, the vibe has to be better around this team, plus I can’t begin to imagine all the snickering that went on after hearing Butler’s wacko 3:30 AM practice rant. Their top-flight draft pick, Jarrett Culver, could form a top-flight defensive squad alongside Robert Covington and Josh Okogie, perhaps Andrew Wiggins if his dormant defensive potential ever awakens. They’re fresh off a 119-111 win over Indiana, and are 2-2 in the preseason if you count their game against international competition.

Culver had just arrived to Minnesota via the trade being ratifying that allowed the Timberwolves to move up and nab him when the Bucks squared off against this team in Summer League. They held him out for…some weird veiled reason about not wanting him to have his first experience with the team be in Summer League? I forget, but it was convoluted and weird. Anyway, I didn’t follow Culver much in college, but I’m intrigued to see how he fits in as a pro considering some seemed to praise his passing ability.