Bucks guard Bryn Forbes won’t pick up the player option on the second year of his contract, reports ESPN’s Adrian Wojnarowski. As a result, he’ll become an unrestricted free agent. 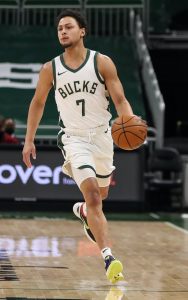 The decision had been expected, since Forbes’ 2021/22 salary would have been a modest $2.45MM if he had exercised the option. Coming off a season in which he played regular minutes for the NBA champions, the 28-year-old presumably feels confident about earning a higher salary – and perhaps a multiyear deal – on the open market.

Forbes’ decision to opt out doesn’t necessarily mean he won’t negotiate a new deal with the Bucks. However, the club’s ability to offer him a raise will be limited, since he’ll only have Non-Bird rights. Unless they dip into their mid-level exception to re-sign him, the Bucks would only be able to offer Forbes a starting salary worth about $2.8MM.

Milwaukee will be in a similar bind with Bobby Portis if he opts out of his contract. Portis has a $3.8MM player option that he’s considered likely to turn down.